Arriving on stage at 1.20 am, Drake performed a selection of tracks including Sicko Mode, Nonstop and Godu00e2u0080u0099s Plan. 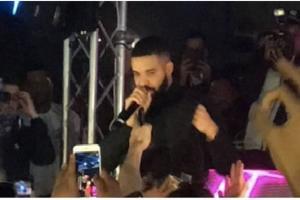 Fans were in dreamland as Grammy-award winning pop star Drake dropped into a small local nightclub in Leicester to perform.

The superstar rocked up at the Club Republic shortly after playing an arena show to 6000 people in nearby Birmingham.

Arriving on stage at 1.20 am, Drake performed a selection of tracks including Sicko Mode, Nonstop and God’s Plan.

Bandra based strategist and entrepreneur,
found his stars align when a dear friend and fellow entrepreneur - Mibul Vaadgama thought of contacting him for a small chunk of the sponsorship.

Ansh immediately contributed, striking his opportunity with Chubbs and Oliver Khatib who Vaadgama had already been warming up towards, for future collaboration with the superstar in the Indian subcontinent.

Ansh foresaw certain challenges and took it upon himself into making the impossible - a possibility.

Along with the support of Francis Coelho of Events Special, Jagwani created the concept of Project Hoodistan which floored Team Drake and a5- aly tour is now in the offing, Mumbai being the kickoff point for the concept!

Next Story : Time-restricted eating benefits those at risk for diabetes: Research