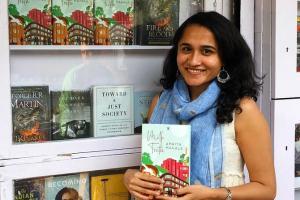 Amrita Mahale trained as an aerospace engineer before turning into a full-time writer. Pic/Instagram Amrita Mahale


Carrying a cash prize of Rs 25 lakh, the JCB Prize for Literature, which was constituted in 2018, announced its longlist on Wednesday. Selected by a five-judge panel comprising Pradip Krishen, Anjum Hasan, KR Meera, Parvati Sharma, and Arvind Subramanian, the list features four debutants - Roshan Ali's Ib's Endless Search for Satisfaction, Mukta Sathe's A Patchwork Family, Madhuri Vijay's The Far Field and city-based writer Amrita Mahale's Milk Teeth. Other titles include There's Gunpowder in the Air by Manoranjan Byapari, translated from the Bengali by Arunava Sinha, The City and the Sea by Rajkamal Jha, The Queen of Jasmine Country by Sharanya Manivannan, Trial by Silence and Lonely Harvest by Perumal Murugan, My Father's Garden by Hansda Sowvendra Shekhar, and A Secret History of Compassion by Paul Zacharia.

Speaking about her novel's inclusion Mahale, an aerospace engineer who works at an independent non-profit research institute in Mumbai, tells mid-day, "I would be lying if I said I hadn't thought about it. I knew the list was going to be announced at 11.30 am. I left for work and then was stuck in traffic due to the rain so I ended up working from home. Then, around the time of the announcement, I got a call from my publisher and I knew it would be good news." Milk Teeth released last November with a story that is set in the years following post-liberalisation and revolves around Matunga and Mumbai, at large.

Given that the longlist was chosen from submissions across 14 states and six languages, how does a city-specific narrative find such a resonance with readers across the country, we ask the writer. "The basic theme of the novel is the protagonist trying to find their place in a changing world. Even though it is a specific circumstance, it is still very universal," she says, adding that a second novel is already in the works.

Next Story : The weekend digest