The play is about a young boy Bhanu who visits a fair in his town. But unlike his friends who flock to the balloon and sweet sellers, he is fascinated by the wisdom seller, Chatura 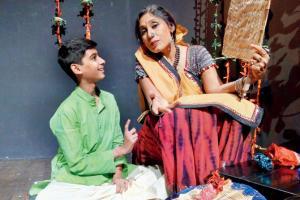 
An interesting feature about the plays for young theatre connoisseurs premiering this week is that two acclaimed companies — known for their productions for grown-ups — are venturing into children's plays for the first time. One of them is Dinesh Thakur's Ank. The 42-year-old company will be presenting Akal ki Pudiya today and tomorrow.

Preeta Mathur Thakur, who plays one of the main characters and has helmed the production and management of the play, shares a memory of her late husband and well-known theatre director after whom the company is named. "My first memory of Dinesh ji is of him telling stories to children at the Prithvi Café during summer," she recalls. For the play, she collaborated with Nivedita Baunthiyal, vice president of the Indian People's Theatre Association, who chose an Indian folk tale, and adapted it for the stage.

The play is about a young boy Bhanu who visits a fair in his town. But unlike his friends who flock to the balloon and sweet sellers, he is fascinated by the wisdom seller, Chatura. In exchange for his gold coin, she gives him the advice that when two people fight, he should never intervene or even be a bystander. When Bhanu's father learns that he has spent the gold coin on a piece of advice, he asks Chatura to return the money. She does so, but extracts a promise out of him that his son will not follow her advice. What transpires next makes for the rollercoaster plot of the play, which has been in the making since March.

"At first, I was a bit sceptical of having children play the role of Bhanu and his friends. But I was pleasantly surprised to see the kind of discipline they bring to the rehearsal," shares Thakur, speaking of Mitarth Tewari who plays the lead.

About the shift towards younger audiences, she says, "I loved watching plays as a child; what I didn't enjoy was being talked down to. So, we are trying to treat the play with all the intensity that goes with any of our other productions."

Next Story : Out of the shadow