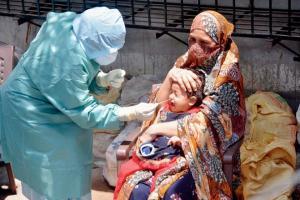 
Twelve COVID-19-related deaths were reported in Mumbai on Saturday. This included a 25-year-old Chandivli resident, who is reportedly the youngest in the city to die of the disease, and an 80-year-old man from Dharavi, taking the total death count in the slum area to four. Meanwhile, 17 deaths were reported across the state.

Civic officials from G North ward said that the octogenarian who had tested positive on April 7, had a history of hypertension. His son had also tested positive and since he was asymptomatic, he had been sent to the PWD guesthouse in Andheri. His 30-year-old daughter from Baliga Nagar had tested positive before him and was the second COVID-19 patient from Dharavi.

Kiran Dighavkar, assistant municipal commissioner of G North ward said that while no new cases were reported from Dharavi, five new cases were confirmed from Dadar. "Four members of one family who were among the high-risk contacts of another COVID-19 patient and a 51-year-old man from NC Kelkar Road tested positive," he said.

Forty-four positive cases have been reported from G North ward, which includes five cases from Mahim, 11 from Dadar and 28 from Dharavi. They have identified 338 high-risk contacts and 21 areas have been marked as containment zones. Civic officials are distributing food and grocery packets to the residents, as all shops and markets in the area have been closed.