BMC team visits Wadala colony housing 3,000 families to get to the root of contamination 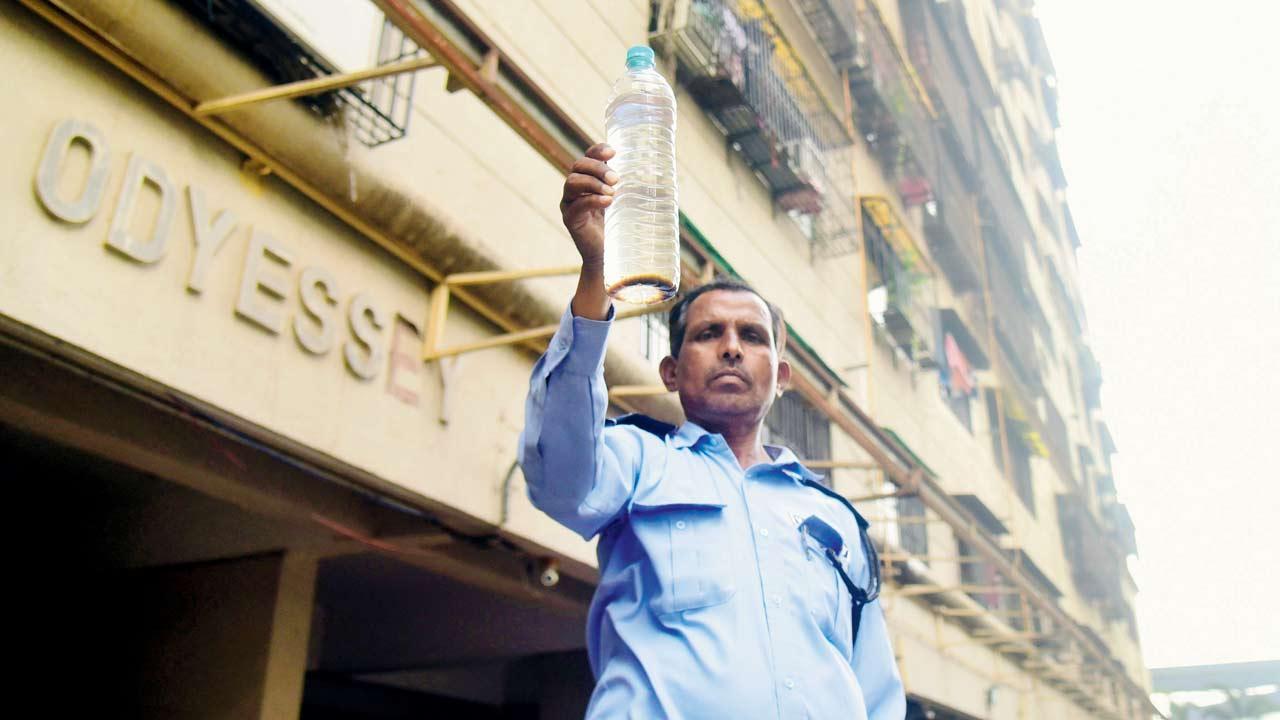 A security guard holds up a bottle of contaminated water at Bhakti Park, on May 17. Pic/Shadab Khan


Days after mid-day highlighted water contamination at the upscale Bhakti Park in Wadala, BMC teams repeatedly surveyed the water supply lines at the society. BMC officials said sewage water from clogged drains is getting mixed with the complex’s water supply. The civic body has also written to the builder, detailing corrective actions that must be taken “immediately” to ensure the residents receive potable water.

The water woes of Bhakti Park are the fallout of internal disputes and disagreements among residents and the builder, said civic officials. “We received repeated complaints from the residents. After inspecting the area, we discovered that the drains within the Bhakti Park are all clogged and dirty. There is a good chance that dirty water from these drains will breach nearby water pipelines, contaminating the water that reaches the buildings. We have done almost everything in our capacity to help, it is the builder and the residents who have to come to a consensus now. A letter was sent to the builder requesting that they take action to resolve the issue, but we have yet to hear back from them,” said a BMC executive engineer (waterworks). 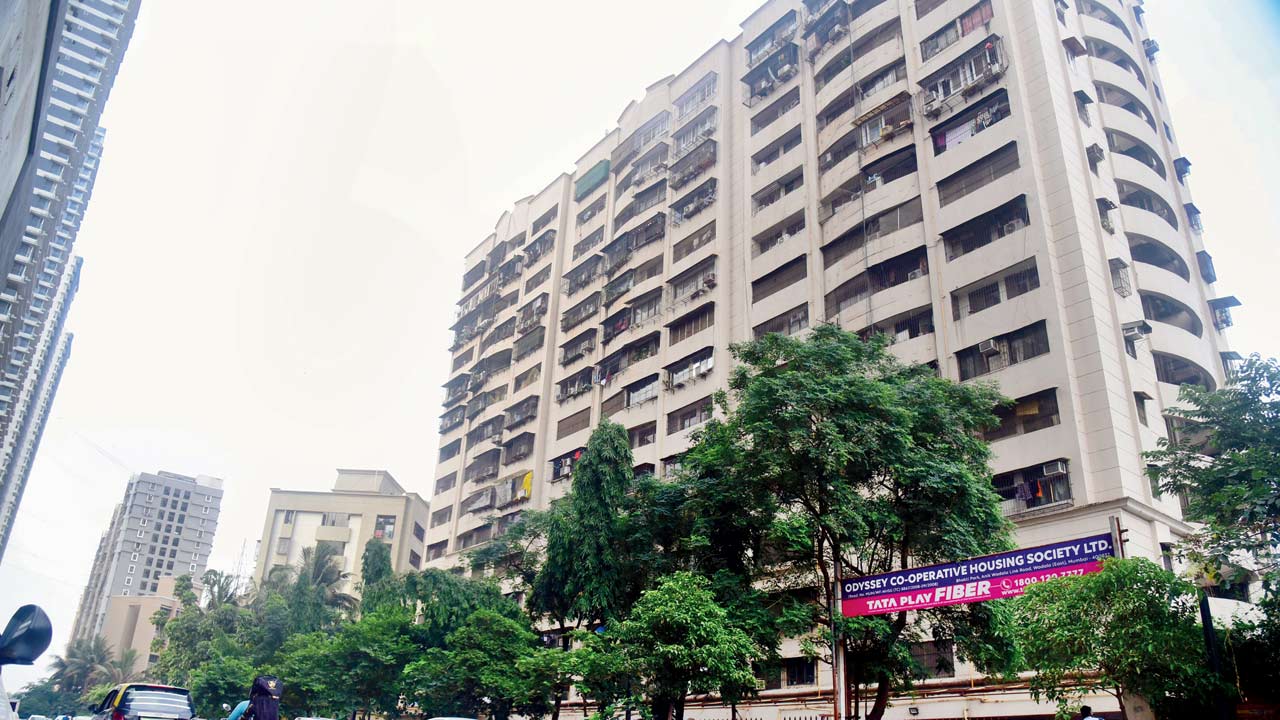 In his letter to the developer, Ajmera Realty, BMC said the civic leakage detection squad didn’t find any visible or ground leakages in BMC’s pipeline and that the 300-mm main internal line is maintained by the builder. “The site in question was inspected by BMC Water Works staff multiple times now and we issued a letter outlining corrective actions that the builder should take as soon as possible,” assistant engineer (waterworks) of M West ward.

For several weeks now, residents of the Bhakti Park complex have claimed to have suffered from gastroenteritis and other water-related ailments due to contaminated water. The 35-tower complex houses 3,000 families. All the buildings face the problem of filthy and stinky water, said the residents. Tests by a private lab had pointed to the presence of harmful E.Coli and Coliform bacteria. A health officer from the ward had also acknowledged the report.

As per the BMC’s letter, the builder must get the internal drainage chambers cleaned regularly and operate a sewage treatment plants (STPs) on the premises to full capacity to avoid the current situation. It has also urged that the builder must install a new fire hydrant at the end of the 300-mm internal pipeline and also ensure that the air valve on the pipeline does not leak. 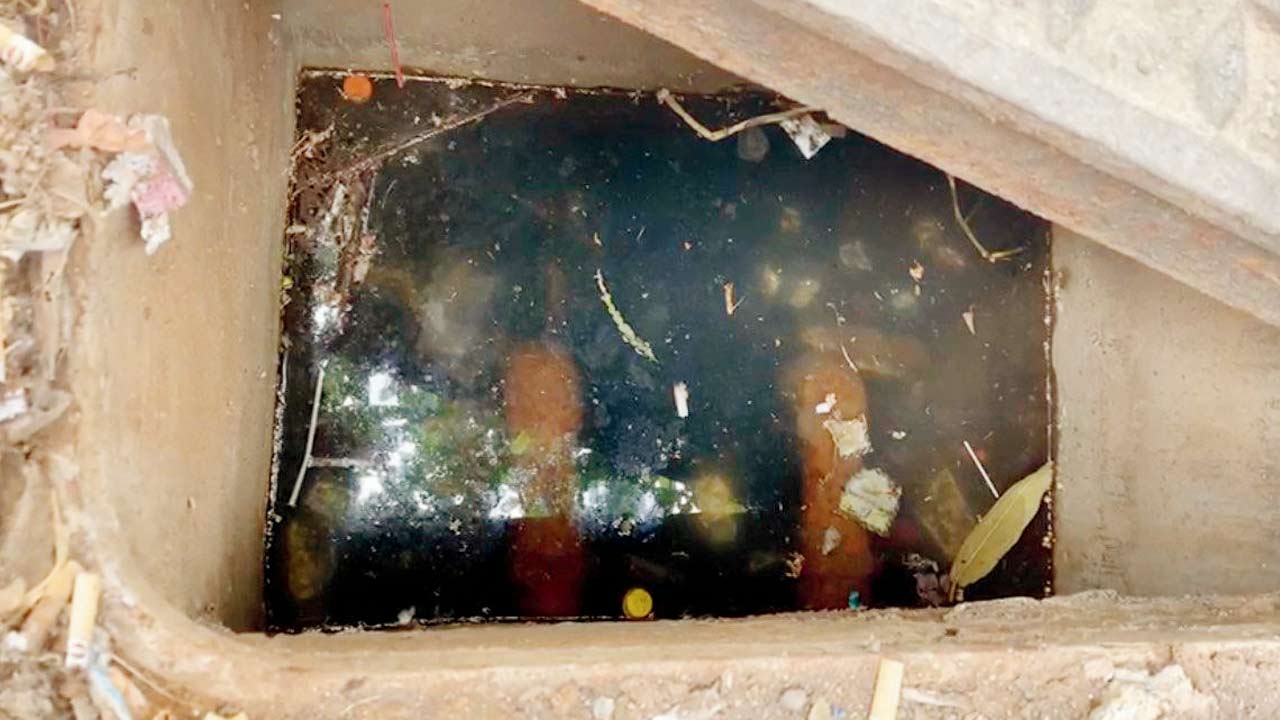 A clogged drain at the Wadala colony. Pic/Shadab Khan

“On Friday and Saturday, BMC teams visited Bhakti Park and discovered a waterline pipe passing near the clogged sewage water drain. They informed the builder that this needed to be cleaned by the builder because the property still belonged to the builder. The team that visited Bhakti Park emphasised the importance of completing this task as soon as possible. If it is not cleaned now, these worms will enter the waterline and continue to contaminate the water supply, causing us to become ill,” said Rohit K, who lives in the Odyssey building.

Advocate Douglas Lopez from Aeon building said, “Since the article appeared in mid-day, there has been a positive shift. Both BMC and the builder are now on alert, and we can see that work to resolve the issue has begun. The BMC team discovered and repaired a few leaks. They opened the chamber near the Odessey building and discovered it clogged with garbage and sewage water. The BMC has notified the builder to have it cleaned, and we are hopeful that it will be completed soon.”