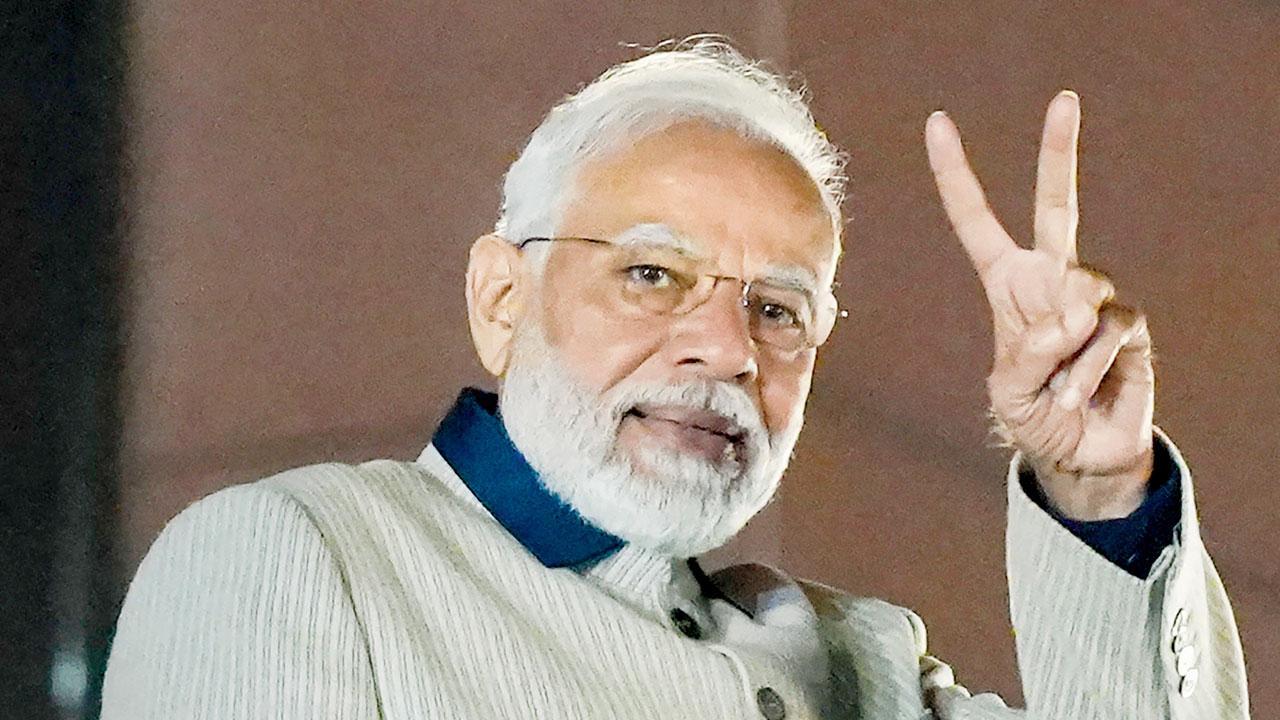 
What struck this reporter during the Gujarat election coverage was the deafening silence of the voters. The silence seems to have spoken through the landslide victory for the Bharatiya Janata Party (BJP), and most importantly for Prime Minister Narendra Modi, whom his parent state has gifted a new record in the 182-seat Assembly. Thursday’s results have yet again proven that the BJP has improved on its deficiencies in the 2017 polls in which it was stuck at the 99 mark.

Modi’s charisma, BJP’s strategies and organisational output have worked better than the Opposition, mainly the Congress, which, despite being backed by good numbers in the House, lacked all that was needed to woo the voters. Its national leaders almost abandoned the elections, leaving the fight to some second-rung national leaders and local satraps. The effort was inadequate to counter the BJP’s micro-planning and execution. This is the Congress’s worst ever show in Gujarat that has helped the BJP return. It would be interesting to see whether the Congress gets the official position of Opposition leader in the Assembly.

The Aam Aadmi Party’s entry had changed the format from a bipolar contest to a three-corner fight. AAP made a decent beginning to garner a vote share that has added to its resume a national party status. Arvind Kejriwal’s tall claims fell flat, but he has inked the name of AAP in the electoral politics. It will be hard for any other party, including BJP, to erase it. 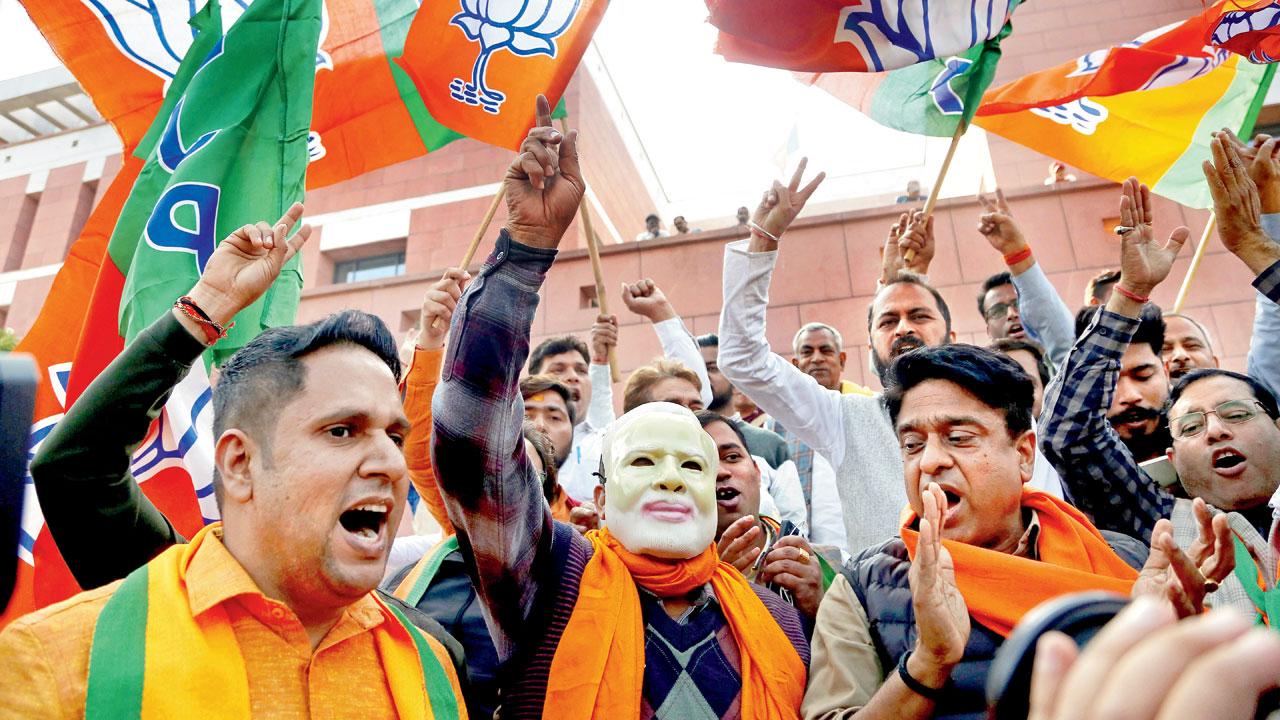 Supporters celebrate the BJP victory at the party’s headquarters in New Delhi. Pic/ANI

In the run-up to the polling, not many believed when chest-thumping BJP leaders predicted 150-plus seats for the party. Their premise was the belief that the Congress would somehow manage to win a sizeable number, if not the count that matched the 2017 figure. Their concern was AAP that was branded as the BJP’s Team B, set up to eat into the Congress votes. Meanwhile, the BJP worked on all aspects. It has already weakened the Congress by poaching MLAs and ending the Paatidar rage, which has emerged as a major reason for the 2017 setback.

The selection of candidates, constituency-specific strategy and taming rebellion, if any, worked in the BJP’s favour. The natives—PM Modi, home minister Amit Shah and a host of party CMs—held a record number of rallies across the state. Unlike the Opposition’s guarantees and assurances, the BJP did not promise freebies in its manifesto, but ensured its nationalist and anti-terrorism agenda and development plank. About 55 per cent voters welcomed the BJP’s ideas and ideology to reject the revadi plank of the Congress and AAP. Small parties and Independents led in four places, thanks to the powerful candidates, who did not need a party tag.

In the final phase of campaigning, the BJP lapped up the issue that fanned the Gujarati Asmita (pride). The remarks made by some Congress leaders came handy for the PM to tear into his critics, who he said took pride in attacking him personally and thereby insulted Gujarat, which the local people have made.

The major takeaway from the polls was the BJP’s stunning show in the tribal belt where it drubbed the Congress beyond expectations. It turned the situation upside down in Saurashtra and Kutch where it had lagged much behind the Congress five years ago. It started creating advantages since the day it lost some seats in 2017 and five years on reaped the electoral benefit. AAP too made some gains, but couldn’t do a Punjab or Delhi in Gujarat. A day before, the Kejriwal-led start-up had come up with a succour in the Delhi civic polls.

PM Modi tweeted, “To all hardworking @BJP4Gujarat Karyakartas I want to say-each of you is a champion! This historic win would never be possible without the exceptional hardwork of our Karyakartas, who are the real strength of our Party.” Former Congress president Rahul Gandhi tweeted saying that his party humbly accepted the mandate in Gujarat and his party will reorganise, work hard, fight for the citizens’ rights and principles.

Linking Maharashtra to the day’s development, former Chief Minister Uddhav Thackeray said the industry that was taken away from Maharashtra to the neighbouring state might have played some significant role in the BJP’s victory. He suspected the BJP of doing the same - planning to append some Maharashtra villages to Karnataka to bolster its Assembly poll prospects next year.

Deputy Chief Minister Devendra Fadnavis countered Thackeray saying the ex-CM had a weapon called tomaneastra (barbs). “This is a victory of the leadership of PM Narendra Modi and BJP’s excellent development work,” he said.

Narendra Modi@narendramodi: ‘To all hardworking @BJP4Gujarat Karyakartas I want to say—each of you is a champion! This historic win would never be possible without the exceptional hardwork of our Karyakartas, who are the real strength of our Party’

Next Story : Mumbai Crime: Was Juhu killer also planning to chop up his mother?