Mumbai: 14 years after escaping law, ‘thief’ nabbed thanks to tattoo 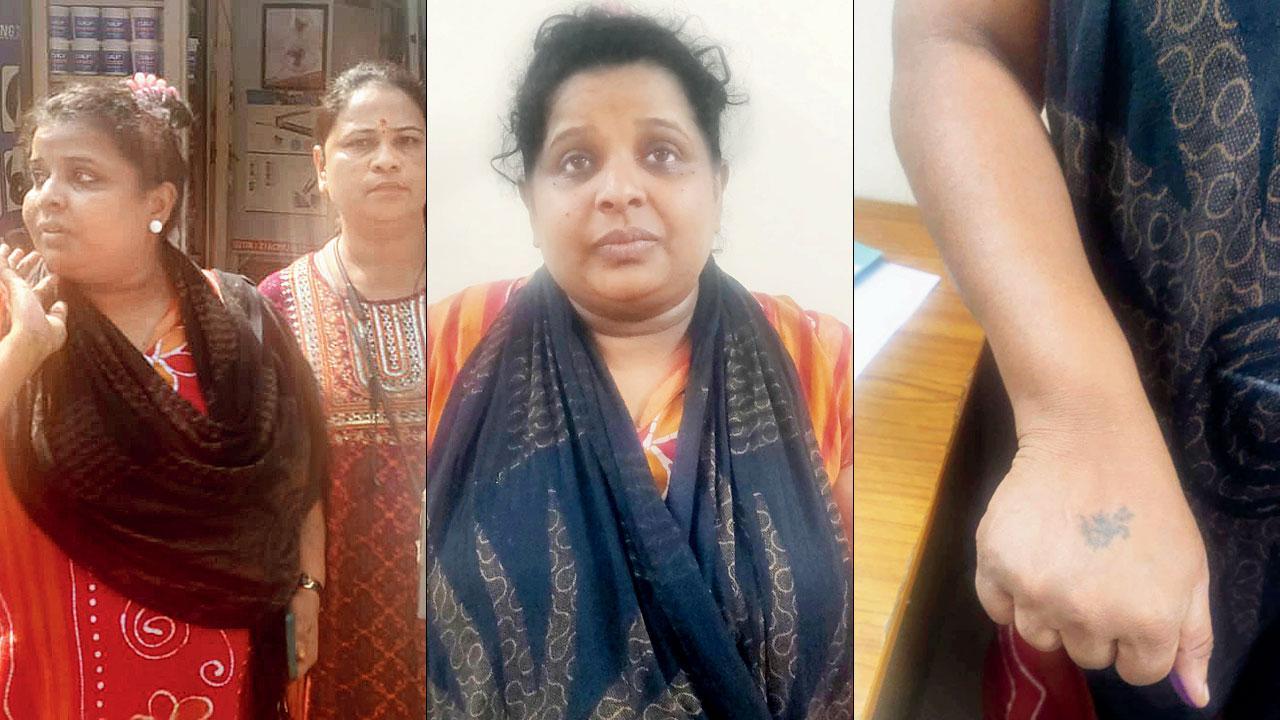 The accused and the parcel that was used to lure her; (Center) Manjula Angmuttu Devendra; (Right) the tattoo that helped the police nab her


A name and description of a tattoo. That’s all the information the RAK Marg cops had about an accused who had been absconding for 14 years. But, after a six-month probe, the indefatigable cops managed to nab the woman.

In 2008, Manjula Angmuttu Devendra, a 24-year-old Sion-Koliwada resident, got a job at an air-conditioner sales office in Sewri. On her second day, she allegedly stole a blank cheque signed by her employer and left the office on the pretext of going out for lunch.

“Manjula rushed to Abhyudaya Bank and cashed the cheque on which she wrote the name Vanita, withdrawing R45,000. When her employer got wind of this, he registered an offence against her at the RAK Marg police station under IPC Sections 381 [theft by worker], 420 [cheating], 467 [forgery of valuable security], 468 [forgery for the purpose of cheating], 471 [using forged document as genuine],” said an officer of the RAK Marg police station.

Manjula was arrested immediately and she spilled the beans. Later, she got bail but stopped attending hearings at the 13th Bhoiwada court, which eventually pronounced her ‘absconding’. In May this year, Kumud Kadam, senior inspector of RAK Marg police station, asked his externment cell in-charge Assistant Police Inspector Mahesh Lamkhade to track the accused down. Constable Narayan Kadam, Ravindra Sable, Neelima Adangle and Sushant Bankar formed a team and took up the tedious job.

“The address given by the accused after her arrest was of a hutment in Sion-Koliwada, which was found to be demolished. She had claimed she had turned to crime to fund her father’s surgery, but no such person was treated at Sion hospital, according to the records. She had also lied about the date of her marriage. There was no picture of her in the police records. Only one thing had been noted—she had an ‘Om’ tattoo on her right hand,” said API Lamkhade. The cops visited various spots inhabited by Tamilians—including Sion-Koliwada, Antop Hill, Amar Mahal, Nehru Nagar in Vile Parle and Dharavi—but to no avail.

“We then changed the mode of investigation. We started looking for her mother. Our constables visited these areas posing as government officials and claimed her mother had been allotted a flat. During one such operation, we obtained the numbers of relatives of the mother.” After establishing that the people were indeed relatives of Manjula, the cops interrogated them and got the accused’s mobile number.

Constable Adangle, posing as a post office employee, then contacted Manjula, claiming there was a parcel for her. The accused fell for it and called constantly to inquire about the parcel. She was then asked to collect the item near Crawford Market. And this was where she was arrested on Wednesday afternoon.

“The accused is very sharp. She had changed her name and address and had made a new Aadhaar card. Though she literally created a new identity, her tattoo gave her away when she came to collect the parcel,” said API Lamkhade. During the investigation, she revealed her new name was Manju Selvakumar Nayar and that she was residing in Chirag Nagar, Ghatkopar.

“When she got married, Manjula told her husband about the crime and he helped her to get a new identity. She is now the mother of a boy. Initially, she claimed it was a case of mistaken identity but her tattoo was her undoing. She was produced in court on Thursday where her bail plea was rejected and she has been sent to judicial custody till December 7,” said Kumud Kadam.

30
Day in November when accused was arrested