Pointing at the increase in cases of hand, foot, and mouth disease, chickenpox and viral fever, schools, doctors ask parents to be vigilant 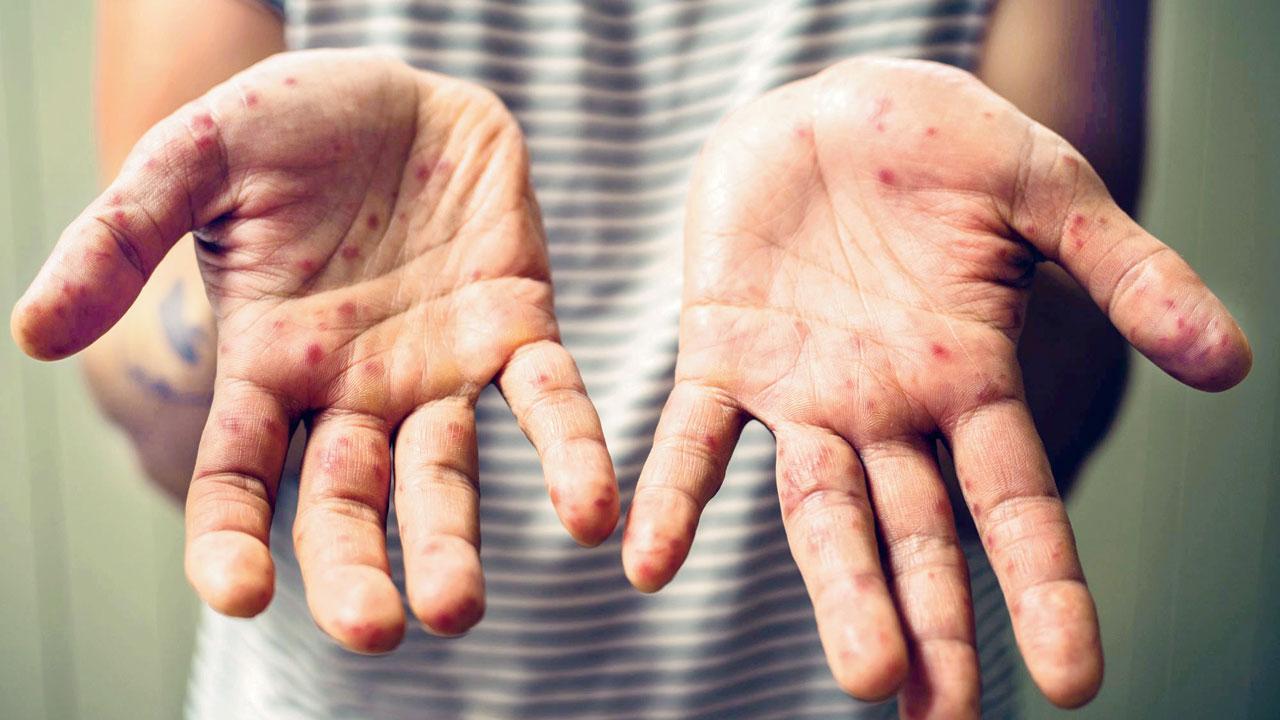 Many parents are confused between chickenpox and hand, foot, and mouth disease as the symptoms are similar, said doctors. Representation pic


With a rise in hand, foot, and mouth disease, chickenpox, and viral fever among children, city schools have issued advisories and shared instructions with parents. Doctors have also given a word of caution.

In an official message to parents, Sanjeevani World School in Dahisar stated: “Dear parent, This is to notify that chickenpox is on the rise in children. If your child develops any symptoms of chickenpox, you should notify the school. Do not allow your child to attend school until all of the blisters become crusted or no lesions appear, as it may spread to other children.”

“Hand, foot, and mouth disease and chickenpox are seen among children. Last month we had five students from junior kg and Std I with symptoms and blisters on their body. Two of them turned out to be chickenpox. We have asked the parents to closely watch out for symptoms and not send kids if they have these symptoms to prevent further spread,” said the principal of a school in Andheri.

Schools have also framed plans to cut down on absenteeism. “The major focus at the moment is to bring back the students to a basic school setting. A framework or advisory has been shared with parents so that the plan leads to success. This process has two aspects—making students and parents comfortable after the gap of two years and making them aware of the repercussions of being absent,” said a spokesperson of Orchids The International School.

The advisory issued by Orchids The Internation School read: “All parents are instructed to write a mail for one-day absenteeism also because even a day of absence leads to disengagement of the child during lessons. In case of a long holiday due to unavoidable reasons, leave should be sought prior from the head of the school.”

Dr Vishal Parmar, consultant paediatrician, Wockhardt Hospital, Mira Road, said, “Nowadays there is slight rise in chickenpox cases. We see 4 to 6 cases in a week. The reason may be missing the chickenpox vaccine, reopening of school, increase in socialisation. We are seeing more cases among grown up children.” Parmar also pointed out, “Many parents are confused between chickenpox and hand, foot, and mouth disease. Both are because of viral infection but caused by different viruses.”

Dr Tushar Maniar, head of department, Centre for Child Health, Nanavati Max Super Speciality Hospital, said, “In the past two weeks, I have seen four to five cases of chickenpox. Fever, cough, and sore throat are common problems which are manageable at home. We prescribe some normal medicine for fever and the recovery rate is also good. Parents should not panic if children have any symptoms, they should just consult a doctor.”

Dr Bhupendra Awasthi, head of the paediatrics department at Surya Hospital, said, “From the past 15 days, we daily see 2 to 3 cases of hand, foot, and mouth disease in children. Apart from fever, cough is common due to climatic conditions. Schools are open and kids are coming in contact, so there is a chance of transmission but nothing serious. It’s like normal flu and kids recover well.”