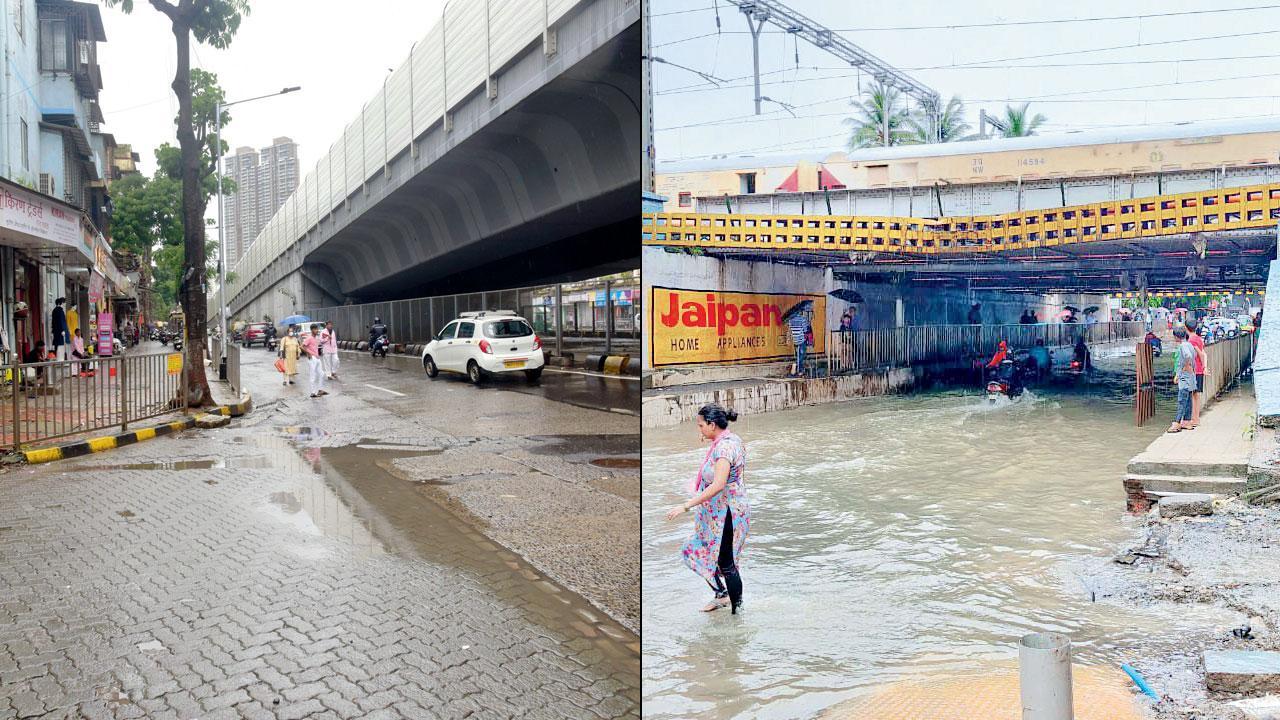 
The civic body’s works over the past year seem to have given relief to citizens living in and commuting through the areas that are prone to chronic flooding between Dadar and Parel. Among those are Hindmata and King’sCircle, both of which were waterlogged on Tuesday after incessant downpour. But, once the rain stopped, both these spots were cleared of water, thanks to the holding tanks and water pumps. The BMC, however, faltered at one point the Milan subway. It was flooded like always and remained so even after the rain stopped, as the civic body forgot to install water pumps for the holding tank. 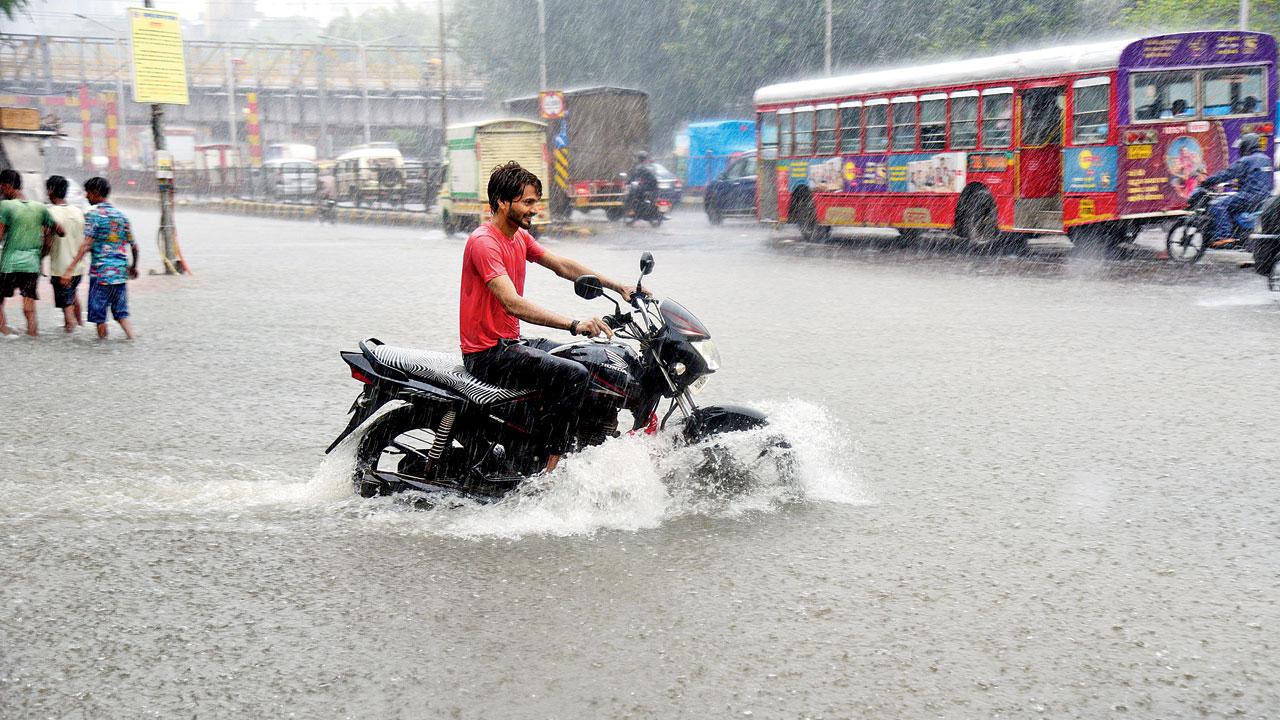 Hindmata—a chronic flooding spot—got some relief this year, as the rainwater receded quickly. The roads were about half a foot under water, which were quickly pumped into tanks and then released into storm water drains with the help of high-capacity pumps. The BMC has built two tanks, one each at Pramod Mahajan Kala Park in Dadar West and St Xaviers Ground in Parel.

Velarasu said the situation would improve further once the holding tanks are complete with full capacity. Fast receding rainwater is a true measure of success of the intervention measures, he added. Sunil More, former corporator and resident of Naigaon, told mid-day that in the past, Hindmata would flood even after one heavy spell of rain and water would recede after several hours. “Today, the road was flooded after the downpour, but the rainwater receded quickly when the rain stopped,” he added. 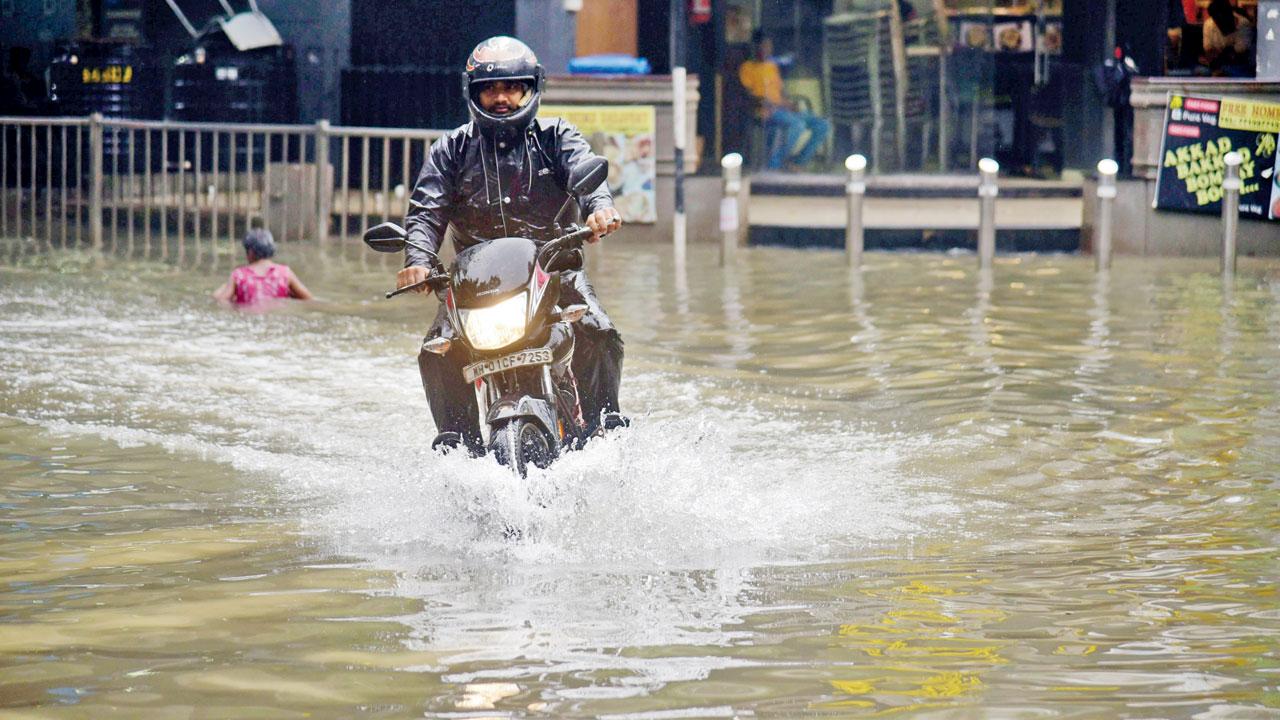 Commuters navigate a waterlogged road, after a heavy rainfal, in Sion, on Tuesday. Pic/Atul Kamble

Even King’s Circle cleared fast on Tuesday. “The area got flooded like every year and the traffic was disrupted. But, water receded quickly when the rain stopped after noon. It is due to the high-capacity water pumps,” said Nikhil Desai, an activist from Matunga. The adjacent areas, like Dadar TT, Sion, Wadala and Chembur, were flooded. The BMC drafted a plan worth R17 crore to build a culvert and a chamber at the low-lying spots in Chunabhatti and rent three pumps with high horsepower for four years (from 2022-2025) to direct rain water to Rahul Nagar nullah. But the work will start post-monsoon.

The BMC, however, faltered at one point—the Milan subway. It was flooded like always and remained so even after the rain stopped, as the civic officials forgot to install water pumps for the holding tank.

The subway, which connects east and west of the railway tracks between Vile Parle and Santacruz, is below sea level and gets flooded every year when heavy rain coincides with high tide.   As per the project that cost R33 crore, the BMC started construction of the holding tank and completed 70 per cent the piling work, which means rain water can be stored in the tank.

The BMC planned to have two pumps with the capacity to remove 1,000 cubic metres of water per hour at the site. But these were not installed, as the tender process isn’t complete. “Today, water was coming from sewerage pipes due to excess pressure of heavy rain. We will resolve the issue of pumps and the spot will get relief this monsoon itself,” said Velarasu.

MLA Yogesh Sagar sent a letter on Tuesday to the civic chief about the waterlogging issue at Dahanukar Wadi. “The area got flooded on Monday night as well. It didn’t used to get waterlogged five years ago. The issue arose after the recent construction of the bridge on Poisar river and the retaining wall. Despite repeated complaints at the ward level, there has been no resolution,” he told mid-day.

“It has been raining heavily for three days in a row. But the city didn’t witness a major waterlogging issue. To start a dewatering pump, there is a need to accumulate at least 1 feet of water. On Monday, there was 175 mm rainfall, and in the last 24 hours, 160 mm,” said BMC chief Iqbal Singh Chahal. 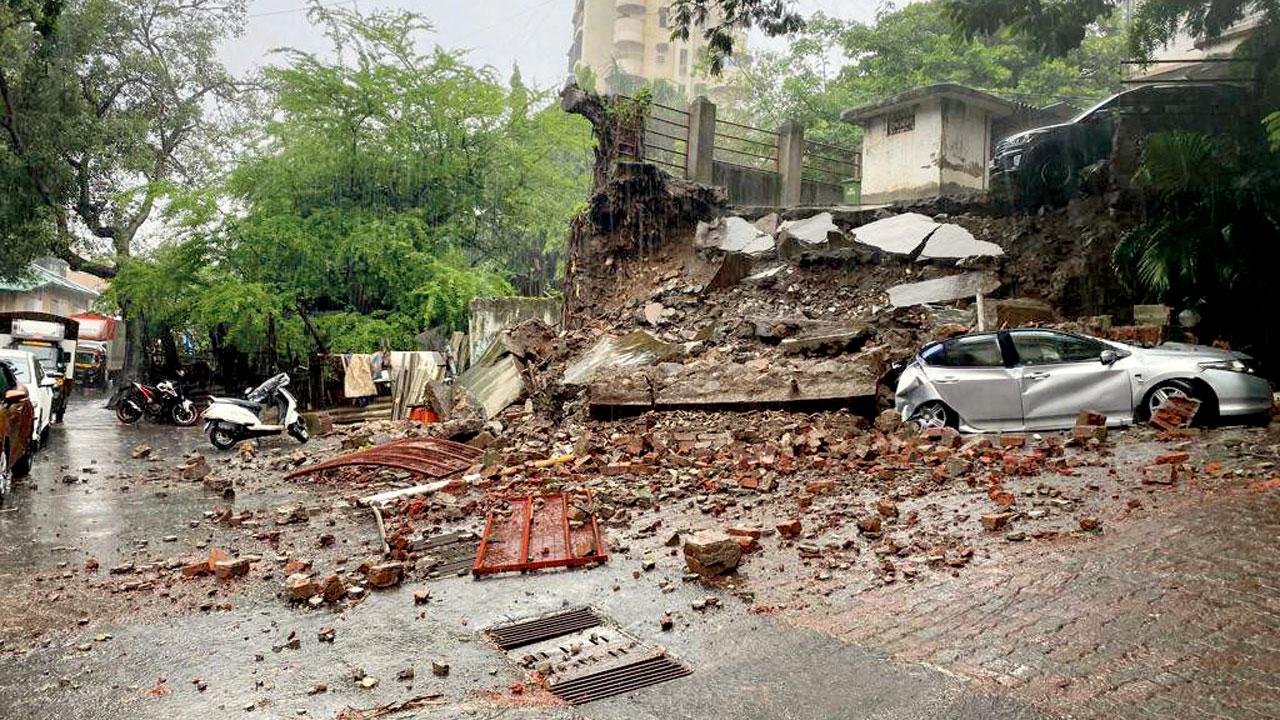 The collapsed wall at Pali Hill

A compound wall of a building collapsed at Pali Hill in Bandra around 3 pm on Tuesday. A car parked on the road was crushed under the debris. The BMC closed the road after the incident, and the Pali Hill Residents Association (PHRA) issued an advisory via a message asking the residents to avoid the route. Swapna Mhatre, former corporator, said there isn’t any support to the rest of the wall and there are even cracks inside the building premises. In 2017, the opposite side of the road had caved in. A BMC official said they visited the site and asked the society to do a structural audit. “After a visual inspection, no danger to the remaining structure was seemingly visible. We will take action after the audit is done,” he added.

Despite heavy rains, suburban local train services on both the lines remained functional in the city. Central Railway services were, however, affected slightly and trains were delayed due to waterlogging.

Inundation of tracks was reported in Sion, Kurla, Tilak Nagar and Wadala on CR line. Train movement on CR’s main and harbour corridors slowed down due to waterlogging of tracks near Kurla. 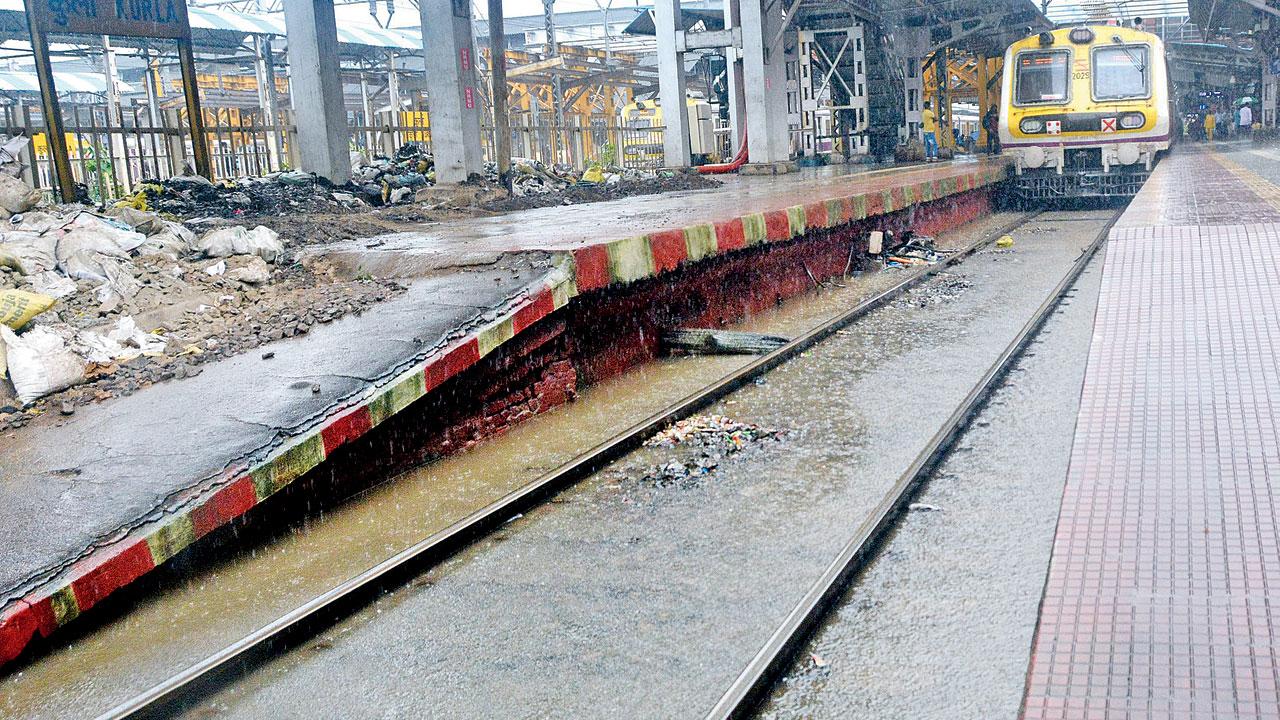 “At some locations, tracks are flooded. Hence the trains are being run at a cautious speed and we are continuously monitoring the situation,” a CR spokesperson said.The BEST Undertaking had to divert routes in the morning, as roads in Sion and Chembur were 2-3 feet underwater, even railway tracks at Chunabhatti station were submerged, resulting in disruption of harbour rail services. Buses were diverted in waterlogged Bandra, Air India Colony, Kurla and a few other locations as well, an official said.

Sarkar added, “A low-pressure area lies over central parts of Madhya Pradesh & neighbourhoods with the associated cyclonic circulation extending upto mid-tropospheric levels tilting south-westwards with height. An off-shore trough at mean sea level runs from Gujarat coast to Maharashtra coast. The monsoon trough is active and south of its normal position. As a result of these meteorological features, south-westerly monsoon flow is expected to strengthen, rainfall distribution and activity are expected to increase over the region and Maharashtra is very likely to experience an active rainfall spell during the week."

According to Skymet Weather, a private weather forecasting agency, most parts of Maharashtra are likely to witness a long, wet spell between July 5 and July 10. 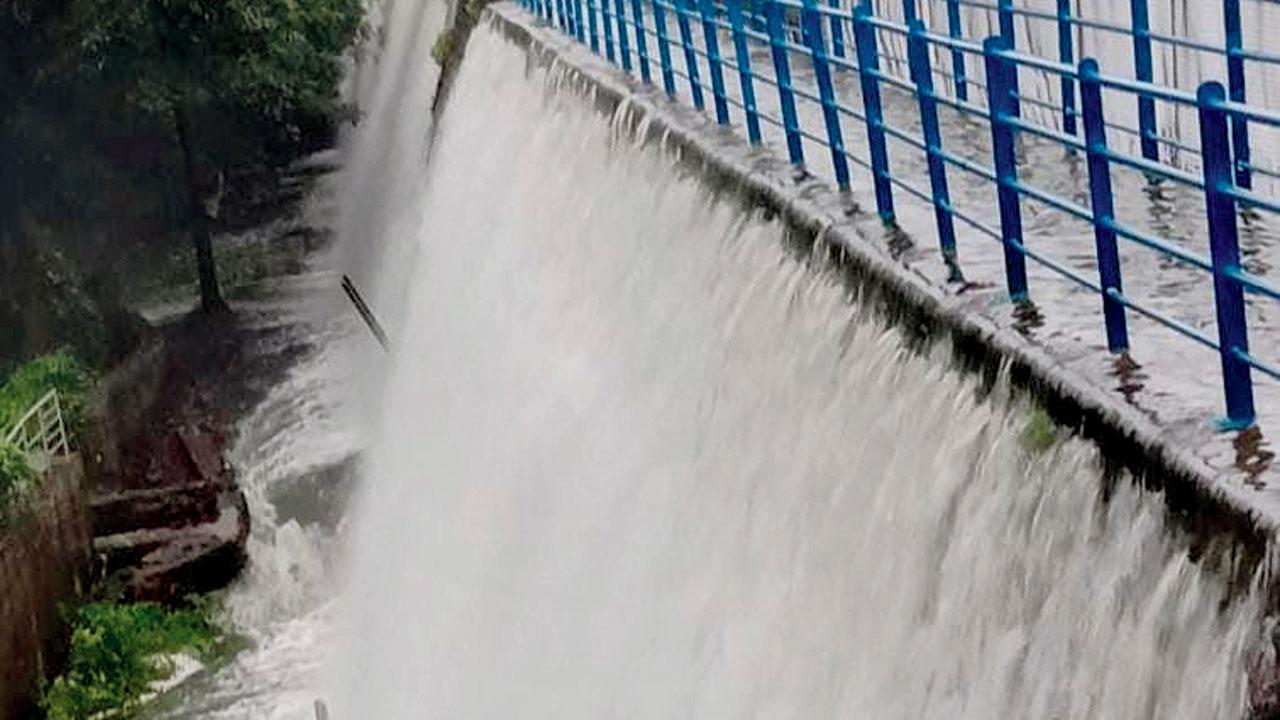 As the catchment area received constant rain, lake levels have started rising. In the past 24 hours, the next five days’ water stock has increased, from1,93,310 million litres on Monday morning to 2,14,169 million litres on Tuesday morning. “There is constant rain in the catchment area but we need a few big spells in major catchments like Bhatsa and Vaitarna,” said a BMC official.  Powai lake started overflowing around 6.15 pm on Tuesday.