Members of Vasant Aradhana B/C/D Cooperative Housing Society alleged that the Brihanmumbai Municipal did not even weigh the garbage before stopping collection of the same and added that when they weighed it themselves, they found the weight was around 65 kg, which is within the permissible limit 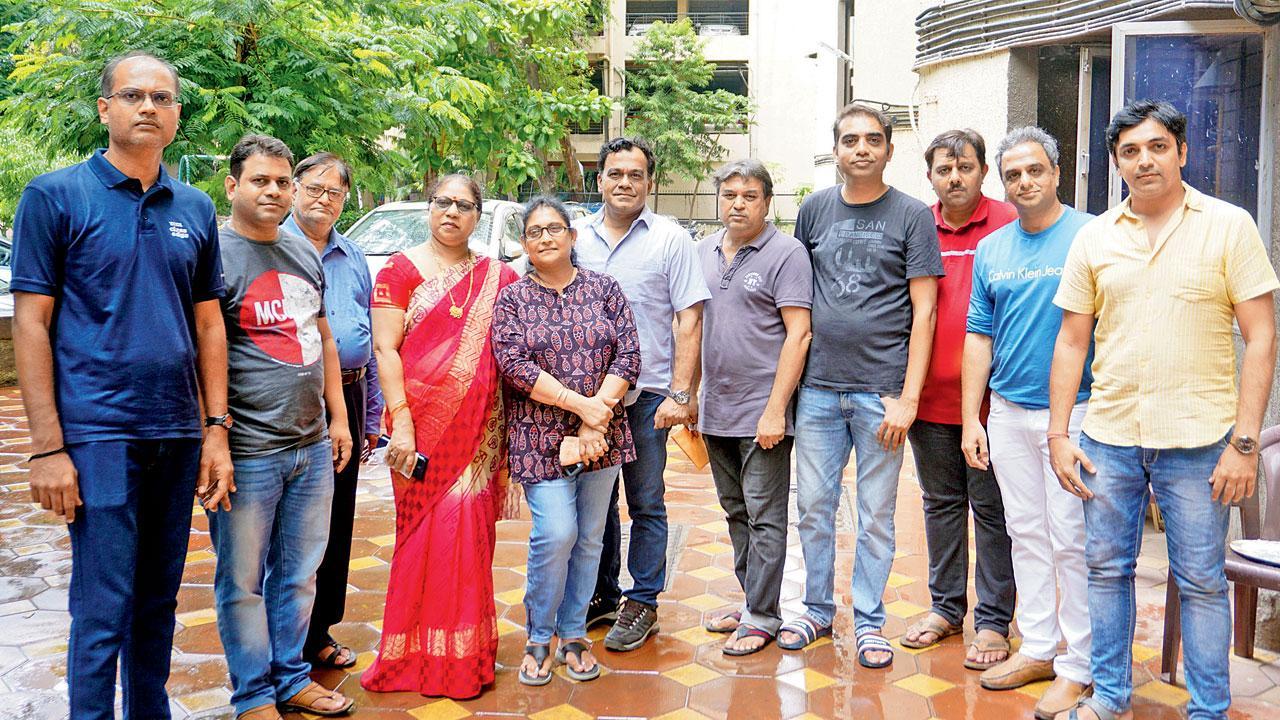 Members of several housing societies in Mahavir Nagar held a meeting on Sunday over the garbage collection issue. Pics/Shirish Vaktania


The BMC is refusing to collect waste, alleged members of a residential society in Mahavir Nagar, Kandivli. They added that the civic body had said the waste weighed over 100 kg, in which case the society has to dispose of the same itself or via a private contractor, as per rules. The society members, however, alleged there was a nexus between the civic body and private vendors, making them pay as much as Rs 1.5 lakh per month.

Members of Vasant Aradhana B/C/D Cooperative Housing Society alleged that the Brihanmumbai Municipal did not even weigh the garbage before stopping collection of the same and added that when they weighed it themselves, they found the weight was around 65 kg, which is within the permissible limit. They accordingly wrote the solid waste department, but to no avail.

This is the plight of several societies who have no choice but to cough up Rs 10,000 to Rs 15,000 every month to private vendors to dispose of the garbage. mid-day visited society, where chairpersons and secretaries of around 15-20 housing societies in the area held a meeting, on Sunday. 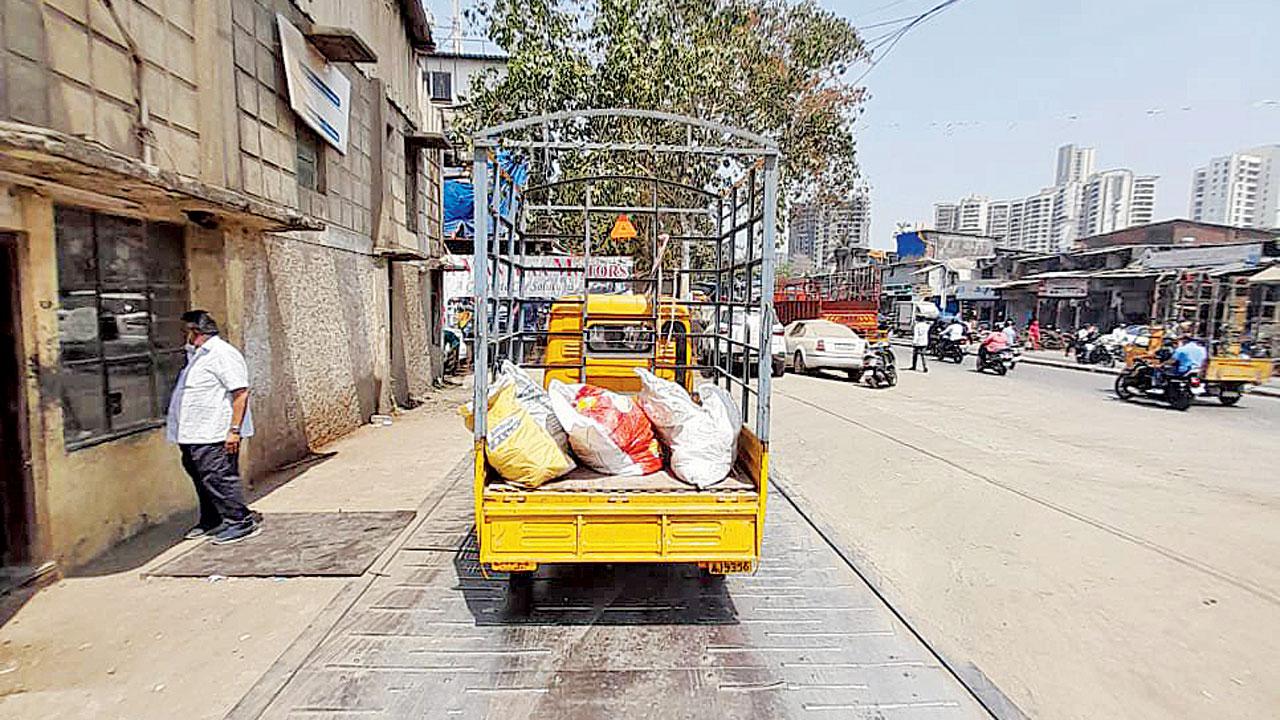 Members of Vasant Aradhana B/C/D Society weighed the garbage and found it to be 65 kg, much less than the upper limit of 100 kg

Deepak Patel, a secretary of Vasant Aradhana B/C/D Society, said, “We have a total of 94 flats in the society, including 10 flats that are vacant. Around 10-12 months ago, the BMC told us that they would not collect garbage because we have more than 100 kg of garbage daily. So, we hired a private vendor who earlier used to charge Rs 12,000 each month but now charges Rs 11,000 per month. We spent more than Rs 1.5 lakh in a year for disposing of the garbage.”

“The private vendors who are collecting the garbage from our society are sent by the SWM department only. Around 10-12 months ago, their rate was Rs 260 per flat which meant Rs 24,440 per month for the society. After bargaining, they agreed to Rs 12,000 per month, and later further reduced it to Rs 11,000,” Patel added.

Society chairman Chandrakant Mehta added, “The private vendor we hired was sent by the BMC. They do not have any fixed rate and are looting us as we do not have any other option. So, we conducted a test drive and checked the weight of the garbage and found that it was only 65 kgs including dry and wet garbage. We sent the receipt to the SWM department and also wrote a letter, asking BMC to collect our garbage but are yet to get any response.

Society treasurer Tushar Sanghvi said, “Our society was constructed in 1996 and this rule was created by BMC recently. We can’t afford to purchase a garbage disposal machine which costs us around Rs 12-Rs 15 lakh, and we also have to hire a person to operate it and clean it. The BMC should take responsibility and help us.”

Other societies face same problem too

The Panchsheel Garden Society in the same area is also facing the same problem. Speaking with mid-day, Kaushal Thakkar, secretary of the P/Q/R society, said, “Since the past 6-8 months, we have also hired a vendor who regularly picks up garbage and we are paying around R100 per flat. The BMC also told us that we will get a 5  per cent rebate but we didn’t get that yet.”

Rajesh Mehta, secretary of Raj Arcade society, which has around 165 flats and 42 shops, said. “Our society is too big and the garbage will be around 120-125 kg. We also requested from BMC that if they are able to collect only 100 kg then remaining 25 kg that we will give it for disposal outside to the vendor. However, we are not getting any response. BMC has not yet initiated to fix the fixed rate card for the private vendors who are looting us. We are spending lakhs of rupees behind it and not getting anything in return.”

Padmavati Complex at Dahanukar wadi has also hired a private contractor, but at a much cheaper rate of R68 per flat. Society secretary Rajiv Gandhi said, “Earlier BMC forced us to hire their vendors who had quoted the charge as Rs 150 per flat. We then found another vendor who offered to charge R68 per flat. Our society is too old and all the space we have is already occupied with parking and greenery. If we keep this garbage disposal machine in society it will create more pollution and also it has high chances of increasing mosquitoes, rats and more things.”

Will check with society: BMC

Rajendra Sankhe, junior overseer officer of SWM department, R South ward, said, “The BMC chief issued a circular which stated that buildings constructed after 2007 and old big complexes have to segregate their garbage on their own whereas occupants of buildings constructed before 2007 do not have to segregate their waste. We already provided garbage dustbins to the societies. The big dustbin has a capacity of 80 kg while others are 20-40 kg. We mostly count weight based on the dustbins. We will check with this society.”

He added, “These societies in Mahavir Nagar area are big and have many members in the society. We will pick up their dry waste, but they have to dispose of the wet waste on their own.”

BJP corporator Pratibha Girkar from Mahavir Nagar said, “I received many complaints from Kandivli residents who are facing issues regarding garbage collection. Many societies which have less than 100 kg of waste are also facing problems as BMC is not collecting the garbage. We will talk to BMC officials and will also protest, if needed. We suspect many BMC officials are involved in this scam.”

Next Story : Community spread of Zika in many states, says NIV study