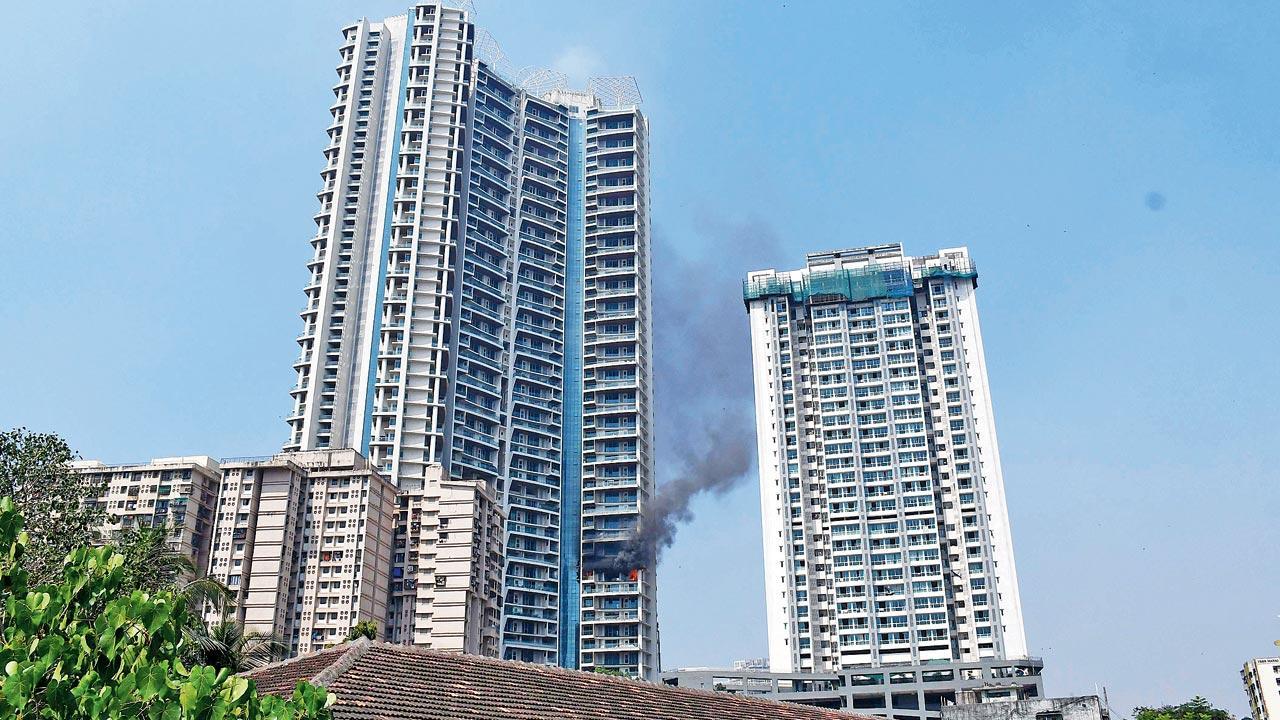 The major fire that broke out at One Avighna Park at Currey Road in 2021 was caused by a short-circuit. File pic


Electrical audit of buildings is yet to become a reality even as the electrical inspector initiated the process for the notification in May. The audit will also require data of buildings which are currently not available with the civic body.

The Brihanmumbai Municipal Corporation had asked the Chief Electrical Inspector (CEI) to conduct periodic audits of buildings that are 15 metres or higher, under section 36 of Central Electrical Regulations, 2010, amid the reluctance of residents of most high-rises to carry out the audits. Accordingly, the CEI, in May, sent the proposal to the state government to issue a notification on mandatory electrical audit of all such buildings, but a notification is yet to be issued. With yet another fire reported at a highrise in Borivli on Sunday, the issue has once again come to the fore.

Electrical safety of highrises has become a crucial issue as more and more fires are reported from the structures. Of the 48,434 fire incidents in the city from 2008 to 2018, 32,516 were because of short-circuit, which is also the primary cause of the fire at Sachinam Heights which claimed six lives in January as well as the ones at One Avighna Park at Currey Road and Hansa Heritage at Kandivli, in October and November last year, respectively.

Though Mumbai Fire Brigade is responsible to douse fires, it doesn’t have the right to inspect the electrical system under the Maharashtra Fire Act. The norms of electrical audit such as period of auditing, standardisation of equipment will be decided by the electrical inspector of Maharashtra.

“We will start auditing buildings just like we inspect lifts of buildings. We have already submitted our draft and the work on notification from the state government is going on, but we don’t have any idea when it will be issued,” said CEI head Dinesh Khonde. He added that there was also the issue of building data and that they are waiting to get it from MFB or the BMC.

However, the BMC too does not have confirmed data of buildings as the work on allotting  unique IDs to buildings is still going on. “The BMC is in the process of allotting unique identification numbers to buildings. Simultaneously, the MFB has started an online database of buildings and we add UID of the buildings, which are available from the BMC. As of now, we cannot predict when the data will be compiled,” said Hemant Parab, chief fire officer, MFB.

As per the draft, all buildings with four storeys or more will be inspected for electrical audit every three years and priority will be given to SRA and MHADA buildings, which are prone to fire. The inspection will be carried out by the CEI’s office under the Industries, Energy and Labour Department.

The electrical audits are supposed to be implemented by the chief electrical inspector of the state by appointing chartered electrical safety engineers, but only five candidates, two each from Mumbai and Pune and one from Nagpur, cleared the exam in December 2021.

4
Minimum no. of storeys in buildings that will have to go for electrical audit