Mumbai Crime: Man behind Malad burglary is accused in 50 other thefts

As cops nab two accused, third one turns out to be mastermind; held earlier in another burglary and currently in hospital with COVID-19 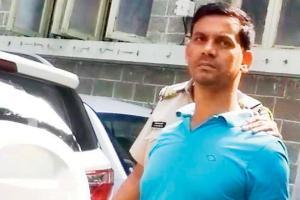 Harun Sardar, the mastermind of the wineshop burglary last week


The Malad police on Monday said they had solved the burglary that had occurred in a wine shop last Sunday.

While two accused from Malwani have been caught now, the main accused had been caught earlier, too, in another burglary case at a wine shop by the Kandivli police. He had then tested positive for COVID-19 and was hospitalised.

The recent burglary took place in a shop 'Wine Well' in Malad on Sunday, July 12, where the accused fled with cash of R11.25 lakh after breaking the shutters.

The accused, Akash Tawde and Rajesh Gunjal, have been arrested from Malwani and have revealed the name of the main accused, Harun Sardar.

According to the police, Sardar is accused in more than 50 burglaries across the city. He was also caught by the Charkop police last year for a burglary in a policeman's house.

Recent arrest
He was held by the Kandivli police on July 16 in connection with a burglary in Chandreshwar Wine Shop near Kandivli station on July 2.

Three suspects were caught in the CCTV footage breaking the shutter of the wine shop. They had fled with cash, some computers, and wine worth R5.9 lakh, and a locker.

Sardar confessed to his crimes and the locker was recovered from his possession while some computers were hidden in a pond in Malwani by him, said an official from Malad police station.

Trouble in recovery
Sardar tested positive for COVID-19 on July 18 and is undergoing treatment at a city hospital.

"We are, therefore, finding it difficult to recover the stolen items. Both the other accused have confessed to having received R1 lakh each and the rest is with Sardar," the police told mid-day.