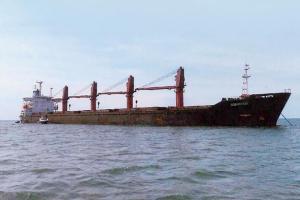 
A dry bulk cargo ship nearly ran aground near the Raj Bhavan in Mumbai on Tuesday morning after the city was lashed with heavy rains overnight.

The ship was noticed precariously close to the rocky shores by Sarosh Bana, a defence expert living at Malabar Hill, and he alerted the Indian Navy, the Indian Coast Guard and other concerned officials.

"I could see the ship in distress, dangerously in the proximity of the shore... at one point, it seemed to have listed and was taking in seawater. Subsequently, the ship apparently lost power and radio contact. Being unable to control itself in the strong waves, it was on the verge of drifting towards the rocky bed or running aground," Bana said.

Later, around 1 p.m., when there was a 4.45 metre high tide, the ship appeared to have regained its balance and restored power onboard even as a patrol vessel sent by the shipping authorities managed to reach upto the Prongs Reef to render assistance.

By afternoon, the ship, though struggling in the strong waves, managed to slowly move back and forth under its own power, negotiated the treacherous shoreline and slowly sailed to the harbour at a speed of 4 knots, said a Coast Guard official.

Further details, including the country of origin and of owners of the dry bulk cargo carrier, whether it sustained damage in the incident, etc were not available yet.

The incident triggered concerns since the sea route was utilised on two occasions by terrorists to wreak havoc on Mumbai in 1993 and 2008.


Mid-Day is now on Telegram. Click here to join our channel (@middayinfomedialtd) and stay updated with the latest news

Next Story : Aaditya Thackeray says he is a target of 'mucky politics'