Three bidders qualify for the work to rebuild Andheri connector; officials say further scrutiny is underway to finalise a suitable contractor for the project 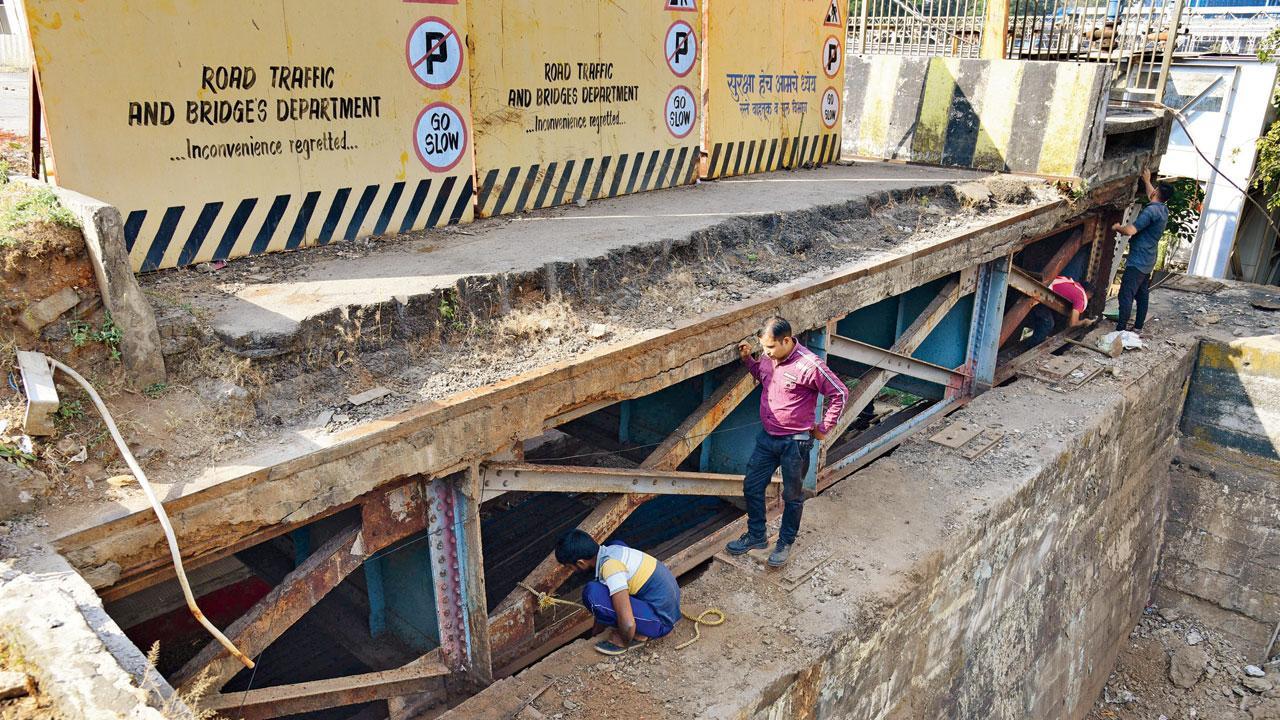 Workers from the railways and the BMC inspect the Gokhale Road bridge, in Andheri, on November 22. Pic/Nimesh Dave


The reconstruction work of the Gokhale Road bridge could begin soon, as three bidders for the project have been qualified. Civic officials said they will issue a work order in the next 15 days. Thereafter, the Brihanmumbai Municipal Corporation (BMC) will seek the permission of the railways to begin rebuilding the Andheri east-west connector.

“The BMC invited a tender of Rs 84.72 crore on November 12 for the reconstruction of Gokhale bridge. Five companies participated in the tender process, and three of them qualified. A B Infrabuild Ltd quoted the lowest cost of the project at Rs 74.56 crore. SAI Projects Mumbai Pvt Ltd quoted the second lowest amount of Rs 82.10 crore and the third bid of Rs 83.73 crore came from Shree Manglam Buildcon Private Ltd,” said a civic official.

“We will now scrutinise the documents of all the three qualified contractors. Then, we will decide who will get the contract,” said Sanjay Kaundanyapure, chief engineer of the BMC’s Bridges department. “Scrutiny and the process of taking administrative permission will take a minimum of 15 days, after which we will issue a work order to the contractor. Normally, administrative work takes time, but we are working fast on this project,” he added.

Another official said that initially, the tender was for both demolition of the existing bridge and construction of a new one. However, after the railways agreed to demolish the bridge, the BMC removed the demolition clause. “As per the BMC’s terms, the contractor who conducts the demolition takes the debris, so most of the time demolition is done without any payment. Hence the estimated cost of the bridge, Rs 84.72 crore, has remained unchanged,” the official added.

The BMC has decided to rebuild the four-lane bridge in two phases, with a deadline of May 2023 for the completion of phase 1. The civic body estimates to complete the second phase by September 2023. “The construction of the approach road to Gokhale bridge is in the final stages. The work started in 2020, and the BMC will spend R80 crore on the construction of the approach road,” an official said. Civic activist Dhaval Shah said, “The BMC needs to work faster, as they have promised to open phase 1 of the project for traffic by May 2023.”