He was replying to a query whether the Shiv Sena was painting the BJP as Maharashtra-drohi in matters pertaining to actor Kangana Ranaut, Republic TV editor-in-chief Arnab Goswami and Shiv Sena leader Pratap Sarnaik 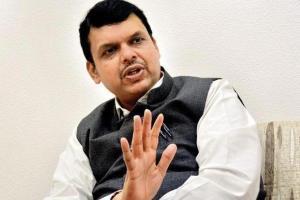 
Senior BJP leader Devendra Fadnavis on Wednesday said the Shiv Sena is not Maharashtra, and asserted that it was his party which worked towards protecting the identity of the state when it was in power for five years. He also accused the Sena of labelling those who levelled charges of corruption against it as being "Maharashtra-drohi" (anti-Maharashtra).

"Nobody becomes Maharashtra-drohi just because someone calls that person so. When allegations of corruption are levelled against them, they call that person a Maharashtra- drohi," Fadnavis said in a press conference. He was replying to a query whether the Shiv Sena was painting the BJP as Maharashtra-drohi in matters pertaining to actor Kangana Ranaut, Republic TV editor-in-chief Arnab Goswami and Shiv Sena leader Pratap Sarnaik.

"It was the BJP which worked towards keeping the identity of Maharashtra intact when it was in power for five years...We made Maharashtra number one state, surpassing Gujarat in terms of investments and I am proud that I was the chief minister (at that time)," he added. "The Shiv Sena should understand one thing that they are not Maharashtra," he added.

When asked about NCP's state unit chief Jayant Patil's allegations about bogus voters registration ahead of the upcoming graduate and teachers' constituencies elections, Fadnavis said it means that the NCP leader has accepted the defeat. "There is no EVM, so he knows that if they face defeat, they would not be able to blame on it. Which is why he is making such claims," he said.

On being asked about his support to Uttar Pradesh's ordinance on 'love jihad and whether he thinks it was possible in a progressive state like Maharashtra, he said, "How can be the law on love jihad called regressive? The terms progressive and regressive are individuals perspective. I am surprised about Shiv Sena, which had once taken a strong position against 'love jihad'."

"They wrote big editorials, sought legislation against love jihad, but now they have taken a U-turn," he added. Replying to a question about Chief Minister Uddhav Thackeray telling Prime Minister Narendra Modi about the 'politicisation' of COVID-19 situation in the state by the BJP, Fadanvis said, "It is a welcome sign that the state government has taken cognisance of BJP's agitations in the state."