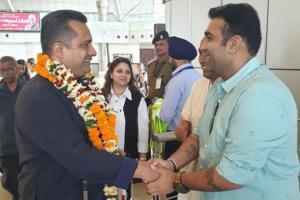 ROLBOL is growing faster than most have thought. Yes, Darshan Sankhala's ROLBOL Talks are gaining lots name due to its unique concept. It would be best if you had the exceptional talent to motivate others, and Darshan Sankhala and his team are doing a fabulous job.

Many top names today are supporting this concept with the whole heart. Recently a very famous personality Gaur Gopal Das meet Darshan Sankhala on his India tour, and he was really impressed with his ROLBOL Talks. According to Gaur Gopal Das its a great concept and today people need such efforts to boost people's energy and motivate them to the right path. Darshan and Gaur Gopal Das in one picture was a picture-perfect image two champs and positive people joining in one motivational concept ROLBOL talks.

A few days back Vivek Bindra most popular motivational speakers of India and fantastic personality too acknowledged Darshan Sankhala's effort. He also took part in a few programs with Darshan Sankhala in his ROLBOL talks and "Udgam".

Next Story : Coronavirus: How Modi government is running the country from home