Opposition members shout slogans against Vijayan for not being able to protect an NRI, who was brutally beaten up by cops 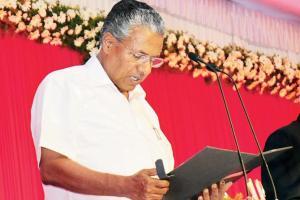 
Kerala Chief Minister Pinarayi Vijayan said that Congress MLAs were supporting "terror" groups, angering the Opposition and leading to chaos in the Assembly. There was pandemonium as Opposition members shouted slogans against Vijayan and the Home Department for failing to protect a non-resident Indian (NRI), who was brutally beaten up by the police late on Tuesday soon after landing in Kochi for Ramadan holidays. Speaking in the House, Vijayan said "knowingly or unknowingly" certain Congress legislators were supporting "terror" groups.

Congress member Anwar Sadath went hammer and tongs against the manner in which NRI Usman was beaten up by four policemen, leaving him with a fractured cheekbone. Vijayan said it had come to light that it was Usman who first hit the policemen. An angry Opposition then trooped to the Speaker's podium shouting slogans against Vijayan. "I know Alwaye (where the incident took place) very well. None should forget that this was the place where a bus burning terror incident took place sometime back. Among the people who created a ruckus after Usman's arrest were those with 'terror' links," said the CM.

Next Story : Tuticorin issue comes up in Assembly again