Thar Express from India departs for Pakistan on right time

The train leaves from Jodhpur's suburban station Bhagat ki Kothi every Friday night at 12.50 am. 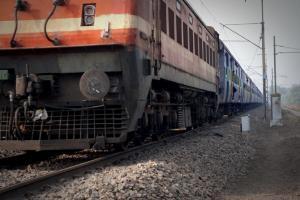 
Jodhpur: In the wake of soaring tensions between India and Pakistan, the Thar Express, which plies between Jodhpur and Munabao in Barmer, the last station of India and connects finally with Karachi in Pakistan through Khokhrapar, the first station in Pakistan departed on Friday on its usual time. The train leaves from Jodhpur's suburban station Bhagat ki Kothi every Friday night at 12.50 am.

This Friday, with around 300 passengers, the train departed amid the prevailing tensions between the two neighbouring countries as there were speculations that just like Samjhauta Express, the Thar Express might get suspended. Speaking to ANI, Mohd Ismail, a resident from Pakistan's Karachi appealed both the neighbouring countries to maintain peace instead of resorting to war.

"Citizens of both India and Pakistan want brotherhood. We felt very good here. We appeal to both nations to live with love and peace. War will only bring loss of lives and properties for both the nations. We felt safe in India. We did not face any issue here," Mohd Ismail said.

A woman from Pakistan's Hyderabad, who came to India to meet her relatives said, "I came to India to meet my relatives. When I came here along with family the situation between the two countries was fine but unfortunately, the situation started to become tense. There should be peace and love between both the countries as our half of the people are residing that side of the border and half here."

Few people have claimed that they are going back to their country Pakistan without spending the full duration of their visa keeping the prevailing situation in mind. But in the meantime, they are happy that they have not faced any problem in India. Keeping in view the current situation of both the countries, arrangements were made for security at Bhagat ki Kothi station in Jodhpur. Passengers travelling from Thar Express are being given admission only at the station after scrutiny.

CPRO Northern Railways, on February 28, announced that the Samjhauta Express from India has been suspended with effect from March 3, till further notification. An official announcement highlighted the "cancellation" of the bi-weekly train Delhi-Attari-Delhi till further order. Tension spiraled between India and Pakistan after the Indian Air Force on February 26 carried out a strike at a Jaish-e-Mohammad (JeM) terror training camp in Balakot. The strikes were in response to the terror attack in Pulwama in which about 40 CRPF personnel lost their lives. JeM had claimed the responsibility of the attack.

The situation between both nations became more tensed when Wing Commander Abhinandan Varthaman, flying a MiG -21 Bison fighter plane, was chasing Pakistani jets that transgressed into Jammu and Kashmir on February 27 and crossed over to PoK where his aircraft was shot down. He ejected safely and was taken to the custody by the Pakistani Army.

However, after India mounted pressure on Pakistan through the international community, with National Security Adviser Ajit Doval holding talks with the US and other P-5 countries, the Wing Commander was released by Pakistan on Friday.