Till date, a total of 34,968 people have lost their lives to the virus that originated from Chinas Wuhan and gripped the entire world 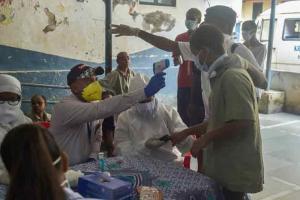 
A total of 52,123 cases of COVID-19 infection across India was reported in the last 24 hours, stated the Union Ministry of Health and Family Welfare on Thursday pointing out that more than 70 per cent of deaths are "due to comorbidities".

Till date, a total 34,968 people have lost their lives to the virus that originated from China's Wuhan and gripped the entire world.

India is the third worst-hit nation by the pandemic. The total number of COVID-19 cases reported till date is 15,83,792 and the number of people who recovered from the virus stands at 10,20,582.

"The recovery rate from the virus stands at 64.43 per cent," said a senior ministry official. As per the records of the ministry, in the last 24 hours, a total 32,553 people have recovered.

The ministry stated that in the last 24 hours, 775 people have lost their lives which is about 32 deaths every hour. It also pointed out that 18,795 new active cases were reported from across the country.

In Andhra Pradesh, one of the worst-hit states, a total of 7,244 new cases were reported in the last 24 hours taking the total number of active cases to 63,771. The ministry stated that a total of 55,406 people recovered from the virus in the state and in the last 24 hours, 2,784 people left hospital or quarantine centres after recovering from the virus. So far, 1,213 people have lost their lives and in 24 hours 65 succumbed to the disease.

The national capital, where the Union Home Ministry monitors the pandemic situation, has so far 10,770 active cases and in the last 24 hours, 117 people got infected with the virus. A total of 1,18,633 people have recovered from the virus and in the last 24 hours 1,126 people recovered. A total of 3,907 people lost their lives in Delhi from the infection.

Karnataka, another worst affected state, recorded 92 deaths in the last 24 hours taking the total number of deaths due to coronavirus to 2,147. The state has 67,456 active cases. In the last 24 hours, 3,014 people got infected. As per the ministry records, 4,901 people have been recovered from the virus in the state.

So far, Mizoram and Manipur reported no death from the virus. In the last 24 hours in Manipur, a total 114 people were infected, while Mizoram reported three cases.

On Wednesday, the Home Ministry issued guidelines for the 'Unlock 3.0', which will come into effect from August 1.

According to the guidelines, restrictions on movement of individuals during night have been scrapped, and yoga institutes and gymnasiums have been allowed to open from August 5.

International air travel has been permitted in a limited manner under the Vande Bharat mission. Further opening-up will take place in a calibrated manner.

Next Story : COVID-19 has become airborne: Rejoinder to UGC reply in Supreme Court