'Villainous' fathers at home and the Centre

Indian voters want PM Narendra Modi to be a paternalistic villain, but how can he be truly fatherly when he's never been an actual father? 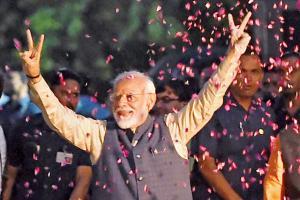 Some people are depressed since Narendra Modi's re-election, though there are more who are elated. Pic/AFP

Last week, I spent a day acting in a music video. The song picturised is from the EP that my son Barun's psychedelic rock band, SkyEyes, released in February (you can stream it on Spotify, iTunes, YouTube, Amazon, etc).

The song, Letter to My Father, traverses a spectrum of emotions including rage, frustration and imploration: it starts with a screaming "Why are you like this?" and ends with the gentle "Papa, won't you smile today?" Barun did not write it; his guitarist did, based on a life experience of marrying against his father's choice. The song's sentiment, however, is full-throatedly endorsed by the entire band if their performance is any indication.

I'm the only real-life father to play a reel-life father in this video. The other three "fathers" were actual actors. One was a bassist in an ancient Indian rock band who had earned his living playing the villain in several Bengali films. The second teaches drama at the same school where the guitarist holds a day job. The third is a Haryanvi film actor: his latest role was as a villainous father in last month's release Chhoriyan Chhoron Se Kam Nahi Hoti, directed by Satish Kaushik (of Bollywood, who actively promotes Haryanvi cinema); the actor's next assignment was the day after our video shoot, and he was to play, yes, a villainous father. Perhaps the universe is sending us fathers a subtle message.

The video's narrative involved the band's performance onstage and their projection of their father-figures sitting in the audience. There's also a dream sequence. We shot at Delhi's Akshara Theatre, in these dog days of summer, and it was tiring. The director had definite ideas about shots, sequence, and framing, while her young assistant showed off his cinematography skills. The five-member crew would find it tough in Mumbai.

I discovered that I am no actor. I find acting difficult. I had a go at it last year, for a brief scene in The Accidental Prime Minister, a film I co-wrote (incidentally, my contribution included seeing the script as a father-son story). But I was never in school plays; for me stage fright was an almost physical thing (of course, many A-listers in Bollywood are as good at acting as I am, though it matters not to the box office).

The music video gig was especially taxing because only the song is on the soundtrack, while we actors were limited to body language and facial expression.

The most difficult part was when I had to show anger towards my son. It was weird because I was the only real father; and truth be told, I can't bring myself to be angry with him (though my life has had its moments of everlasting private shame). The director tried to egg me on, camera shoved in my face, to show extreme anger. Instead, I smiled in embarrassment.

Then she said, "Tell him that you hate him, you hate him, you hate him!" but I was existentially prevented from even uttering these words. She became more insistent and under pressure, I finally shouted "I dislike you", which came out sounding polite and formal, and which provoked uproarious laughter from my son and his bandmates.

Finally, I spotted a crew member off-camera so I pointed at him and shouted, "I hate that guy! I hate him! I hate him!" Mercifully the sequence soon concluded.

It's no secret that for most of us, emotions are an intimate, private matter that we often can't articulate or express overtly, especially if they're more nuanced than joy or sorrow. I just don't know how to shape my face, especially if I have to show a change in emotion.

Professional actors are no doubt trained to turn their insides out, and this is no small thing. As in other arts, it involves in exposing your inner life to the world. I doff my cap to all professional actors.

The greatest actor of all of our times is, IMHO, Prime Minister Narendra Modi. His audience, the Indian voters, want him to be a paternalistic villain, rule them and "fix the country" and "clean up society".

It is true that he is an accomplished actor: shedding tears at the drop of a Himachali cap, making a no-nonsense grimace for the cameras, playing victim to the keystone kop opposition, and pretending to work day and night though he doesn't have the bandwidth to even read files. But how can he be truly fatherly when he's never been an actual father?

Some people are depressed since his re-election, though there are more who are elated. It was good not to think about Modi for one day last week. It is hard enough pretending to be a villainous father without worrying about the villainous paternalism we're going to suffer the next five years.

Aditya Sinha's latest book, India Unmade: How the Modi Government Broke the Economy, with Yashwant Sinha, is out now. He tweets @autumnshade Send your feedback to mailbag@mid-day.com

Next Story : Fight a multi-pronged battle against malaria and dengue