The many worlds of Collin. RIP.

My friend Collin, science fiction writer and dweller of fantasy worlds, understood that a true friend is somebody to talk to, someone to depend on and someone to enjoy 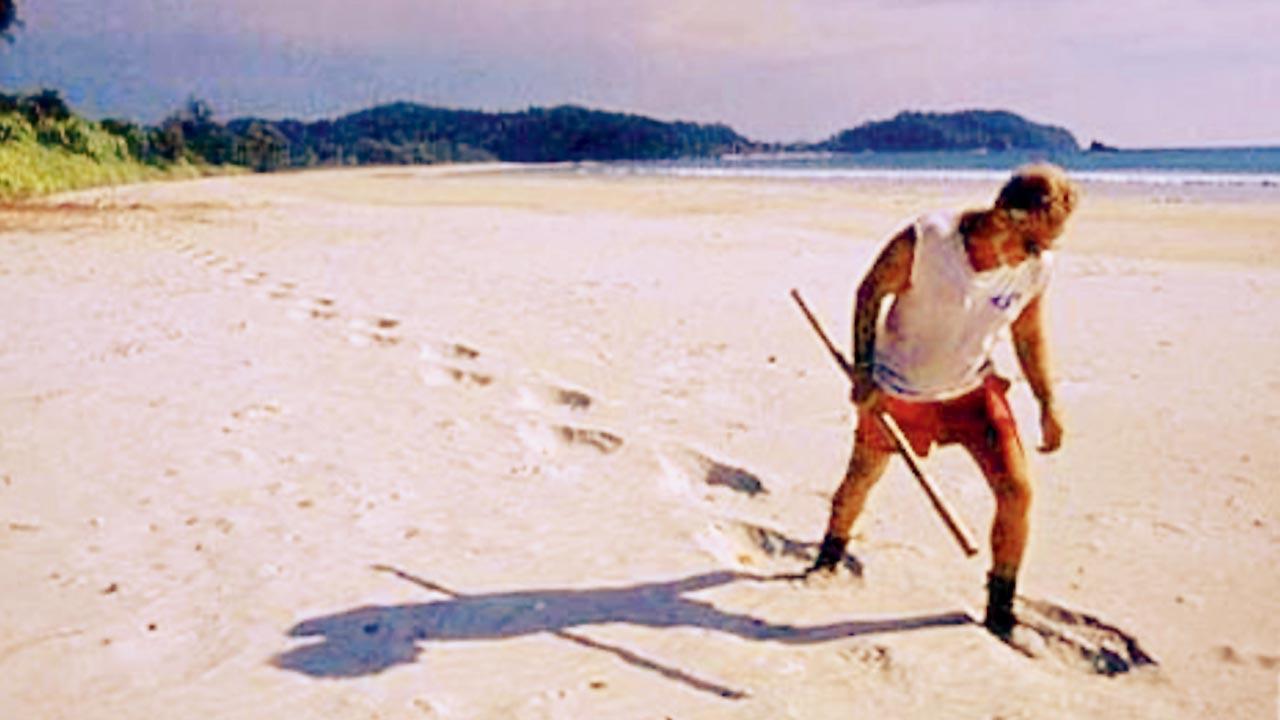 Collin’s Facebook page cover, spoofing himself tracking some creature much larger than himself

If you ever saw Collin Piprell at a meeting of the Bangkok Writers Guild, a meetup I ran for 12 years until COVID struck, you mightn’t have guessed that he did not live on this planet. Collin inhabited worlds few would venture into, worlds where alternate realities, technology, chaos and virtual futures tormented oddly retro humans, some of whom might have been at home in Raiders of the Lost Ark.

Outwardly, though, you’d see a barrel-chested, shy, Hemingway-like man who hated being photographed and always looked like he was on the verge of leaving. He could be long-winded as easily as blunt, civil as easily as sarcastic. These are the manifestations of a mind that is always churning. Collin’s tongue could never keep up with his inner muse. He has been a nomad in his life, moving from the academic airs of McGill University to lives as a Canadian miner, an elephant tracker, a scuba diver and, if I remember rightly, and an Oxford don.

Collin was always struggling with his life’s welcome—yes, welcome—burdens, which included too many manuscripts to edit, too many friends he was afraid of losing touch with, too many thoughts waiting to be thought and too few hours in the days for everything that needed his time.

As you read this, this Tuesday, Collin and I were to have lunch together, perhaps at Bangkok’s British Club which he was so fond of. We had last met in February; too much time had passed; I had been traveling, he had been locking horns with his daily devils. But on an evening last week, he died at his own doorway, where his wife found him when she tried to enter.

It hit me, like a blow to my stomach, that someone irreplaceable had left my world. He was only 76. That’s too young to die.

I believe Collin died exactly as he would have wanted to, swiftly, efficiently and without preamble or much fuss. When we last spoke, he said he had worked out—strenuously, almost violently, as always—and was in good shape, except for his eyes, which these days were not his friends.

But for me, Collin was that rarest of beings, a friend at an age when new friendships are not supposed to happen easily. The playing field was not level—I believe he might even have been a better friend to those he knew than they to him.

In a world of cancelled human beings, ghosted relationships and unfilled promises to catch up soon, Collin was an old-schooler who seemed to grasp that reaching out to others is how we make peace with ourselves and that intention, not geography, is the barrier.

Collin understood the value of accumulation, especially of facetime. For 12 years, he was a monthly presence at our writers group meetings. But in between, he’d manage to squeeze out time to meet for tea and cake at Starbucks or lunch at Chu Café. One study says that it takes spending 40 to 60 hours together within the first six weeks of meeting to turn an acquaintance into a casual friend. Between 80 and 100 hours, and the friendship deepens. Of all my Bangkok friends, Collin is the only one who instinctively understood this and negotiated face to face meetings. I realise today what a difference that makes.

It is an art to be close without being intrusive but Collin was a master. He understood the value of attention given. Though intensely private himself, he had a way of remembering the small wrinkles of someone else’s life and gently enquiring from an unobtrusive distance how things were. Visa problems, spousal differences, the pain growing children bring, writer’s anguish, blocked creativity—Collin remembered all and each, and would let you know he was concerned.

He was a creature of ritual with a native grasp of the reassuring power of repeated actions in relationships. If he wasn’t at a Starbucks squinting at his laptop, he might be at the gym knocking himself out, lunching with wife Sara at the British Club or catching an event at the Foreign Correspondents’ Club of Thailand. Having set daily routines freed his mind to soar.

And soar was what it did. His Magic Circles trilogy, MOM, has all the makings of a cult science fiction novel. Set in a future Bangkok where a mall is the last refuge of human survivors of a plaguebot pandemic, he imagined hazardous technoscapes where avatars battled nano-nemeses. The Mall Operations Manager, or MOM, was nearly god—or devil—in this post-apocalyptic dystopia.

The Collin who used to share fantasies and fictions with me over coffee perfectly fits the description of a friend offered by Ohio University’s William Rawlins, professor of interpersonal communication—“Somebody to talk to, someone to depend on, and someone to enjoy.”

And now he is somebody to miss.

Next Story : New infra in Mumbai must reflect quality, standard