DFID has also rebutted the assertion and said the report by The Mail provides little substantial evidence to support its headline: 'Did the family of UK aid's poster boy steal taxpayers' cash meant for earthquake victims? 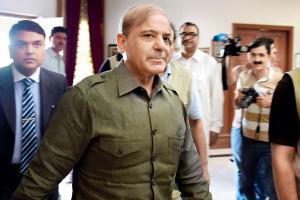 
Islamabad: A British daily has claimed the president of Pakistan's Opposition party PML-N Shehbaz Sharif has embezzled millions of British aid money, a charge refuted by his party as a pack of lies invented by Prime Minister Imran Khan. The Mail on Sunday reported the money stolen by Sharif between 2005 and 2012 came from the projects funded by the Department for International Development(DFID), UK.

The Pakistan Muslim League-Nawaz (PML-N) refuted the claims and called it baseless. PML-N spokesperson Marriyum Aurangzeb through the party's Twitter account said the article was a pack of lies. "It is fabricated, baseless and a pack of lies that has been invented by Imran Khan's conspiratorial mind," said Aurangzeb. Later, addressing a press conference she said the PML-N would sue the publication over the "planted and unsubstantiated" story.

Aurangzeb also accused PM Khan for planting the story. "The news was published through a controversial journalist who works for a UK newspaper and is based in Lahore on Mr Imran's behest," claimed Aurangzeb. DFID has also rebutted the assertion and said the report by The Mail provides little substantial evidence to support its headline: 'Did the family of UK aid's poster boy steal taxpayers' cash meant for earthquake victims?'

The UK taxpayer got exactly what it paid for and helped the vulnerable victims of a devastating earthquake. We are confident our robust systems protected UK taxpayers from fraud, said DFID. Shehbaz, 67, served as the chief minister of the politically crucial Punjab province from 2013 to 2018. He became PML-N president after his elder brother and three-time prime minister Nawaz Sharif was disqualified as the party president following a Supreme Court verdict in 2017. Sharif and his family are already facing charges of corruption and money laundering.

Next Story : Israeli minister speaks of therapy for gays, says he practises it