Karthik on Russell's KKR criticism in 2019: Had man-to-man chat over it 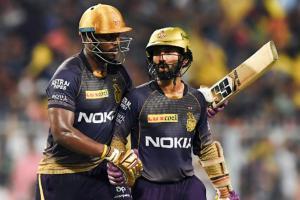 
Mercurial West Indies all-rounder Andre Russell had expressed unhappiness with 'decision making' in Kolkata Knight Riders (KKR) after they missed out on a play-off spot in the 2019 season of the Indian Premier League (IPL).

The aftermath saw fingers pointed at captain Dinesh Karthik, who had taken over from Gautam Gambhir under whom the team had won two IPL titles, for Russell batting lower down the order. The wicketkeeper batsman however clarified that Russell was more unhappy with the fact the team wasn't winning rather than being unhappy with Karthik in person.

Also Read: Dinesh Karthik: Dipika Pallikal knows my ups and downs and how to react

"To be fair, he's one of those guys who wears his heart on his sleeve. I am sure he meant whatever he said. But again, West Indies players are in your face kind of people. But whatever they say, they say it honestly and it's up to how you take it. If you want to take it offensively, then the mistake is on your part. If you want to take it constructively which is how I looked at it. We had a conversation over it man to man," Karthik said on The RK Show on YouTube, hosted by cricket commentator and presentor Radhakrishnan Sreenivasan.

"He wasn't not happy with me, he wasn't happy that the team wasn't winning, that is the bottomline. Whatever he said, I completely respected it."

Karthik said that Russell was apologetic after making those comments and the issue did not snowball because of the relationship between the pair.

"Because I have an honest relationship with him where I can go straight up to him and be like ‘Russ you know what, I don't think what you have said is right, because the way it has come out, it's not great.' He also said ‘you know skip, this is how I felt about it not how it's come out'. There itself half the battle is over.

"But then he had an issue. He said ‘we can do this better. I don't think you are doing this way'. And then I had to explain ‘being a leader, I can't completely please you but we can change things around but not exactly like you want'.

"Having different opinions and dealing with it is one of the most important things. I think you need to be able to stand up and have a conversation. Sometimes a hard conversation as well."

Next Story : Didn't have 500 Test wickets in equation: Michael Vaughan on Broad