"He (Sarfaraz) should be used for his wicket-keeping and batting skills," Akhtar said in a video posted on his YouTube channel. "No way should he continue as captain of the team. He should not be the captain in any format." 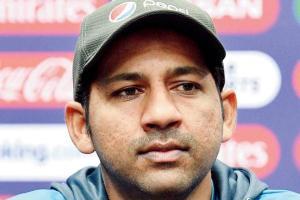 
The Pakistan cricket team has been criticized from all quarters for their poor performance in the World Cup 2019. Now adding to the chorus is former Pakistan speedster Shoaib Akhtar who believes Sarfaraz Ahmed should be ousted from captaincy altogether and should be kept in the team only for his wicket-keeping skills.

"He (Sarfaraz) should be used for his wicket-keeping and batting skills," Akhtar said in a video posted on his YouTube channel. "No way should he continue as captain of the team. He should not be the captain in any format."

Pakistan were knocked out in the group stage of the 2019 World Cup. Sarfaraz Ahmed's men finished fifth in the points table -- at equal points (11) with New Zealand after the round-robin stage. However, the Black Caps qualified as the fourth team for the semi-finals owing to better net run-rate.

According to Akhtar, Haris Sohail should lead Pakistan in ODIs and T20Is whereas Babar Azam should be handed over the captaincy in Test cricket.

"Haris Sohail should be made the captain. He should captain the side in ODIs and T20Is. They should test him (Babar Azam) in Test cricket. I wish him the best. He has scored a lot of runs," he said.

The 'Rawalpindi Express' had earlier lashed out at Sarfaraz following Pakistan's defeat in the round-robin stage of the World Cup and had termed the 32-year-old as a "brainless captain".

Recently, former Pakistan skipper and current Prime Minister Imran Khan, also said that he is working on a plan to develop "best cricket team of the world".

"After the World Cup, I have decided that I will improve this Pakistan team. I am going to reform Pakistan cricket," said Imran while addressing a gathering of Pakistani-Americans at Capital One Arena in downtown Washington DC on July 21.

"There have been a lot of disappointments. Hopefully, in the next World Cup, you will see a very professional, best Pakistan team. Remember my words," he added.

The Pakistan players were also heckled after their huge loss to India in the World Cup 2019. With Pakistan fans mocking Sarfraz Ahmed for his 'Yawn' during the match.

Next Story : Shreyas Iyer: If you are a great talent, then you need some time