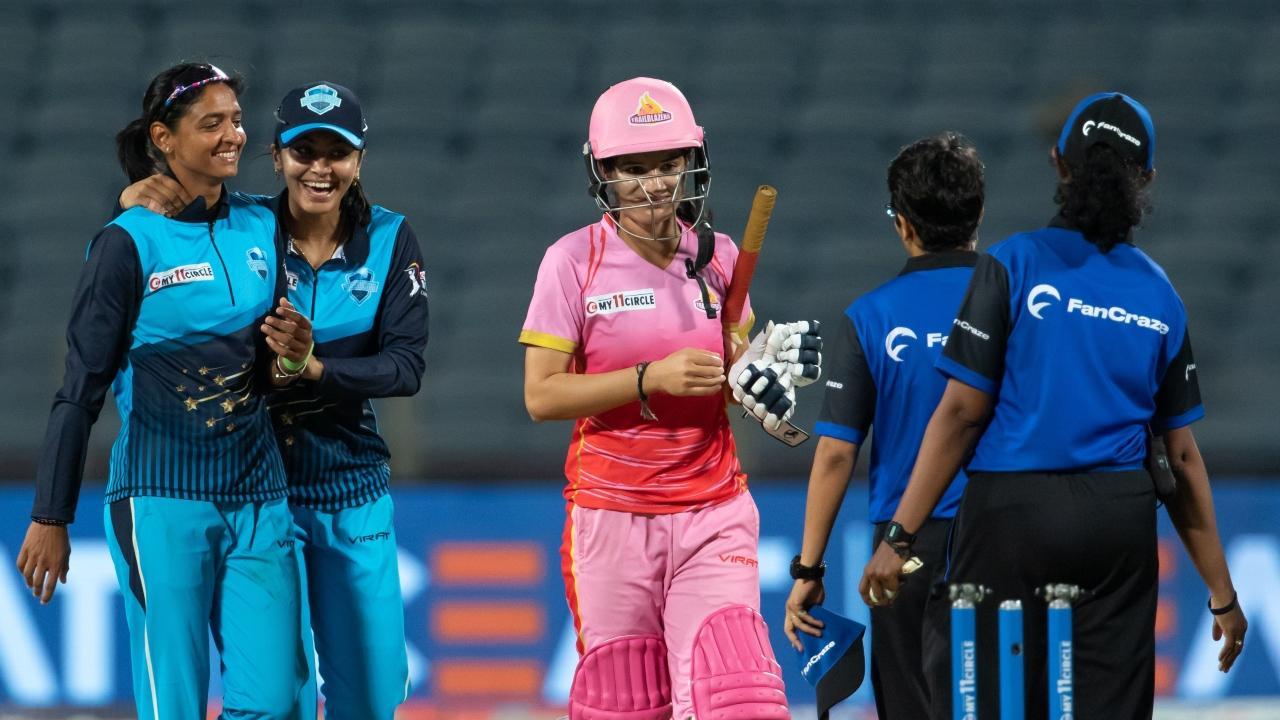 
Pooja Vastrakar picked up four wickets for just 12 runs in a brilliant pace-bowling display as Supernovas notched up an easy 49-run win over Trailblazers in a record-breaking opening match of the Women's T20 Challenge on Monday.

The 22-year-old Vastrakar claimed the wickets of Trailblazers' captain Smriti Mandhana (34), her opening partner Hayley Matthews (18), No. 4 Sophia Dunkley (1) and Salma Khatun (0) in two separate spells to tear apart the batting line-up of the defending champions.

England left-arm spinner Sophie Ecclestone and Australia all-rounder Alana King chipped in with two wickets apiece as Trailblazers could only score 114 for 9 in 20 overs while chasing 164. The Supernovas had earlier scored the tournament's highest-ever score of 163 all out after opting to bat.

Trailblazers made a strong start to their chase with Mandhana and Matthews putting on 39 runs for the opening wicket in five overs. But Vastrakar struck triple blows on Trailblazers to leave the defending champions in deep trouble. She first had the wicket of Matthews off the last ball of the fifth over and then dismissed skipper Mandhana and Dunkley in the space of four balls in the eighth over.

Wickets kept on tumbling in quick succession as Sharmin Akhter (0) was out in the next over for a duck to be King's first victim of the day.
Runs were hard to come by for Trailblazers as they reached 71 for 4 at the halfway mark. But two quick wickets in the 11th over bowled by Ecclestone virtually ended the contest.

Ecclestone had Richa Gosh (2) off the second ball of the over and Arundhati Reddy (0) was run out in the next delivery as Trailblazers batters looked in a hurry to return to the hut. Harmanpreet Kaur brought Vastrakar for her second spell and the pacewoman got immediate success by having Khatun to reduce Trailblazers to 73 for 7 at the end of 12 overs.

Asking rate had climbed more than 11 runs an over by then and one-down Jemimah Rodrigues (24) tried to make a match out of it but she also fell in the 14th over to Meghna Singh to extinguish any hopes of Trailblazers' fight back.

Earlier, Supernovas captain Kaur top-scored with 37 off 29 balls while Harleen Deol and Deandra Dottin chipped in with 35 and 32 respectively. They, however, lost five wickets in the last two overs for just eight runs, including that of Kaur, in a dramatic collapse.

Matthews was the pick of the Trailblazers bowlers with figures of 3 for 29 while Salma Khatun took two for 30 runs.
The Supernovas made a rollicking start, reaching to the tournament's best-ever power-play score of 58 for one with opener Dottin (32 off just 17 balls) in ominous form.

Dottin hit Renuka Singh for three fours in the third over from which the Supernovas took 14 runs. She was, however, run out in the fifth over while backing out too far from her crease. She hit five fours and one six in all.

The other opener Priya Punia (22) continued a bit longer before she was out in the eighth over. Young Deol showed tremendous form and shared 37 runs for the third wicket with captain Kaur.

She hit Matthews for consecutive fours in the eighth over but could not convert her start to a big score, getting out in the 12th over. Kaur, coming out at the fall of Punia in the eighth over, took the onus of steadying the ship on herself though her side lost wickets in clusters.

Vastrakar and Kaur were out in the space of three balls in the 19th over before Supernovas lost another three wickets in the dramatic final over.