‘Marriage wasn’t on our minds’ 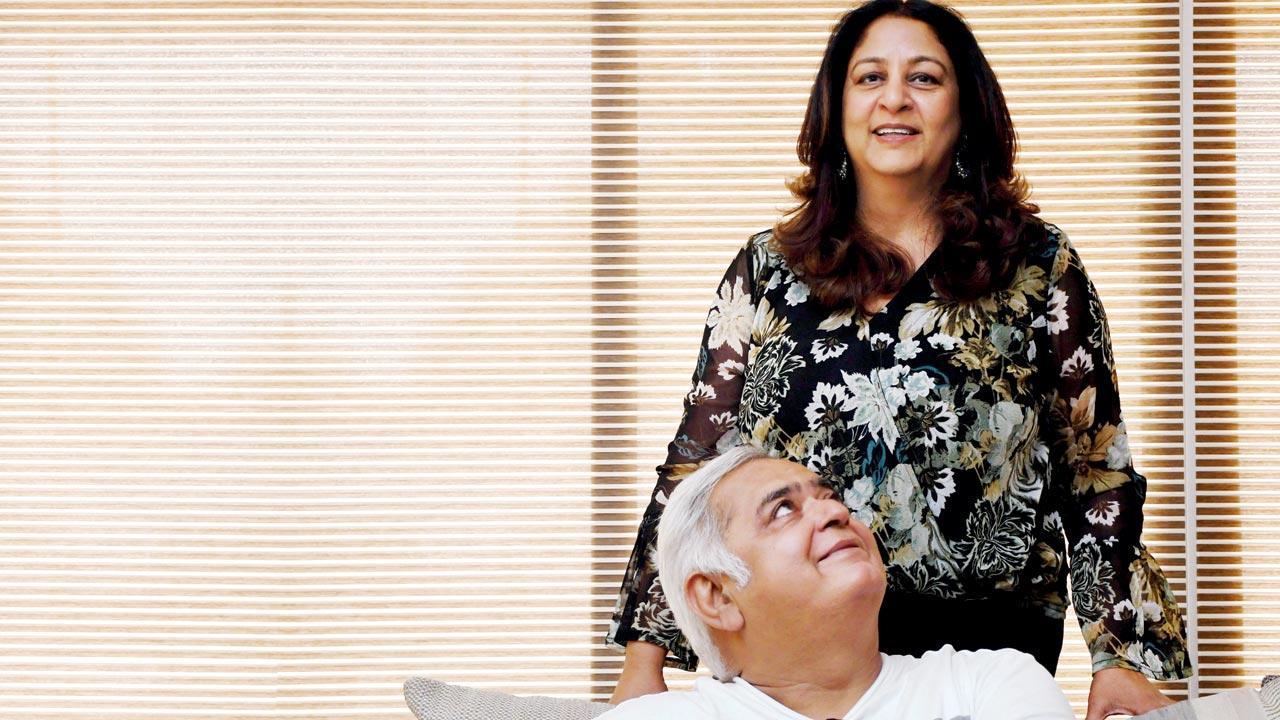 
What would it be like to marry someone you’ve been with for 17 years? It’s something this writer wondered on her way to meet filmmaker Hansal Mehta and his long-time partner and “new bride” Safeena Husain. We were obviously not expecting them to be all coy. Perhaps, we were looking for traces of this new relationship that binds them. “I wonder why anyone would be interested in our story,” Hansal tells us, curious that we were actually curious. Safeena joins us moments later, and sits across her husband on a three-seater sofa at their Bandra home. “Paas aajao,” he says. “Tum aajao,” she teases, “Or else people will think that it was me who was chasing you. Jabki sachayi kuch aur hai.”

The day we meet, it has been exactly two weeks since their “secret wedding” in San Francisco. Theirs wasn’t the kind of ostentatious shaadi that Bollywood is now known for. In fact, their daughter Kimaya played pap with a DSLR that had been gifted to her a few weeks earlier. The wedding happened in a lawyer’s office in California that had been modestly decorated with plastic flowers, drapes and heart-shaped cardboard cutouts, with ‘Love’ scribbled on them—Hansal clarifies this wasn’t his doing. It was a pre-designed set on the mezzanine floor of the office for the many marriages that the lawyer was registering that day. But even while breaking away from the typical, they stuck to the filmi rule book: They announced their wedding on Instagram. 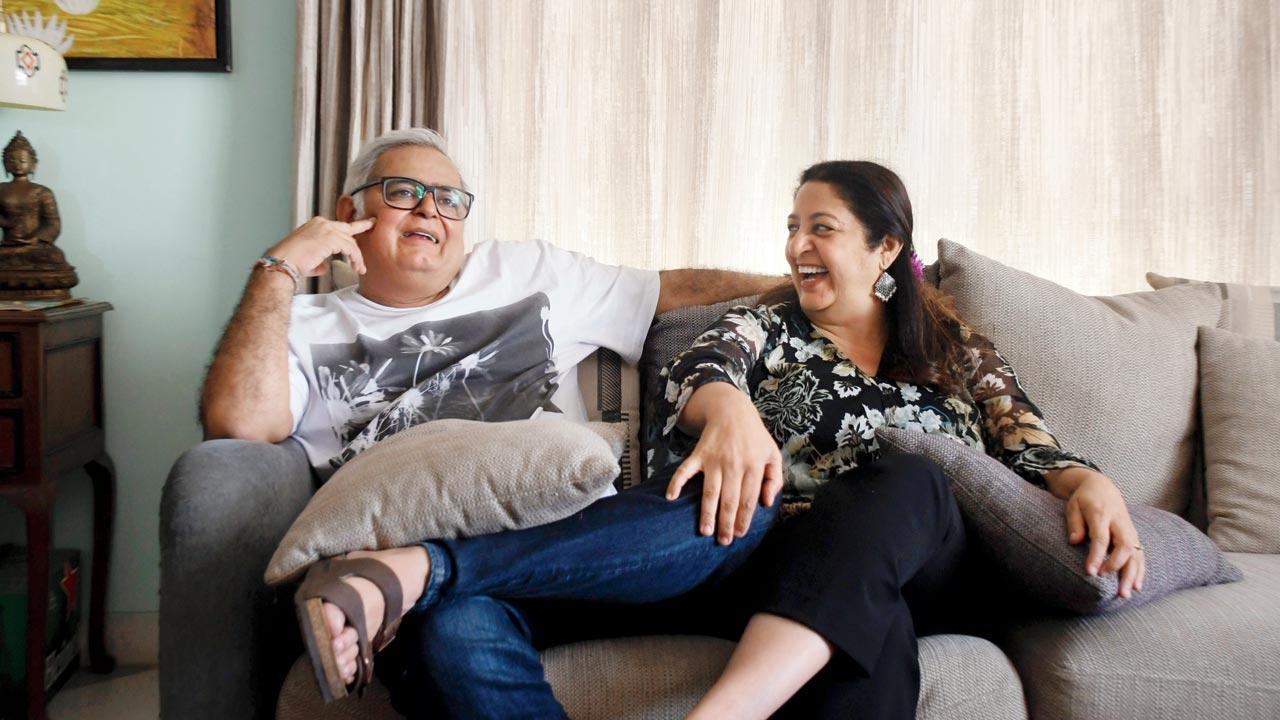 Had it been left to the couple, none of this would have really happened. Marriage, they say, wasn’t even on their mind. “[The conversation about] marriage never came up, because we had children very early on in our relationship,” says Hansal, of his two daughters Kimaya and Rihanna. “And when we started seeing each other, I was already a father to two kids [Jai and Pallava from his first marriage], so she had some advanced booking already,” he jokes. “With all of this, I don’t think we had any time to think about it [a wedding].”

Hansal and Safeena owe writer Daisy Rockwell, who last month won the Booker Prize for translating Geetanjali Shree’s Hindi novel Tomb of Sands, for bringing them together. This was on January 21, 2005. “Daisy was the head of the Institute of South Asia Studies at Berkley, and thought it would be fun to do a Bollywood internship programme for her students. She checked if I could set up a dinner [for her with a few filmmakers and actors], during one of her visits,” recalls Safeena, who at the time, had just moved from California to be closer to her actor father Yusuf Husain. 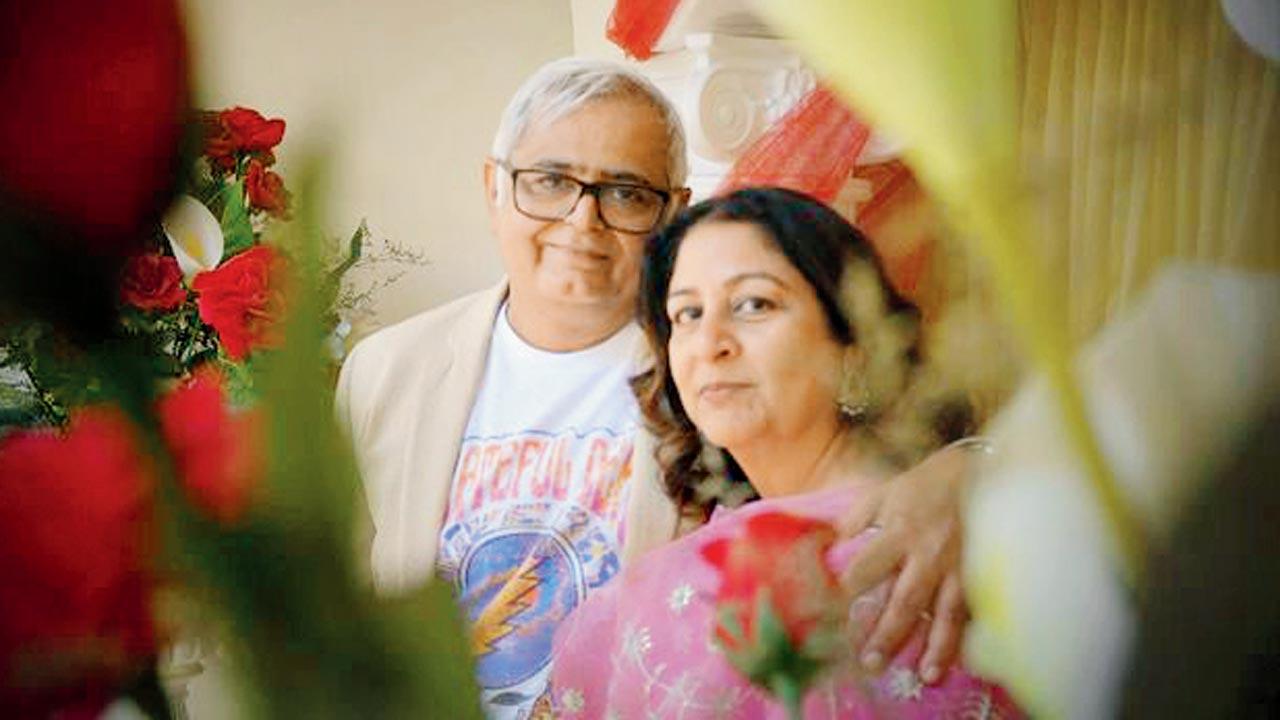 The dinner, she remembers, was attended by Rajpal Yadav, Tinu Anand and Hansal among a few others. “I didn’t know Daisy or Safeena,” says Hansal. “But a common friend had requested that I join them. It was during this dinner that I learnt that she is the daughter of Yusuf Husain, who I had worked with in a show called Family Business. He always spoke about her. Sometimes, if he wanted to leave the shoot early, he would make an excuse that his daughter had come down from the US. He’d actually go somewhere else,” Hansal laughs.

At the time, Hansal had no clue that Safeena was already a huge fan of his work. “Everyone in my family knew how much I loved his film, Dil Pe Mat Le Yaar [2000]. When I finally met him, I was charmed. I liked him a lot. His political leaning was interesting,” she says. We ask him about it. “I was more Left leaning,” he says, adding, “It wasn’t considered a bad word back then. Today, I consider myself liberal.” “But, I think she liked my humour,” he tells us. “No, no, no, he is not funny at all. One should never encourage his sense of humour,” she butts in. 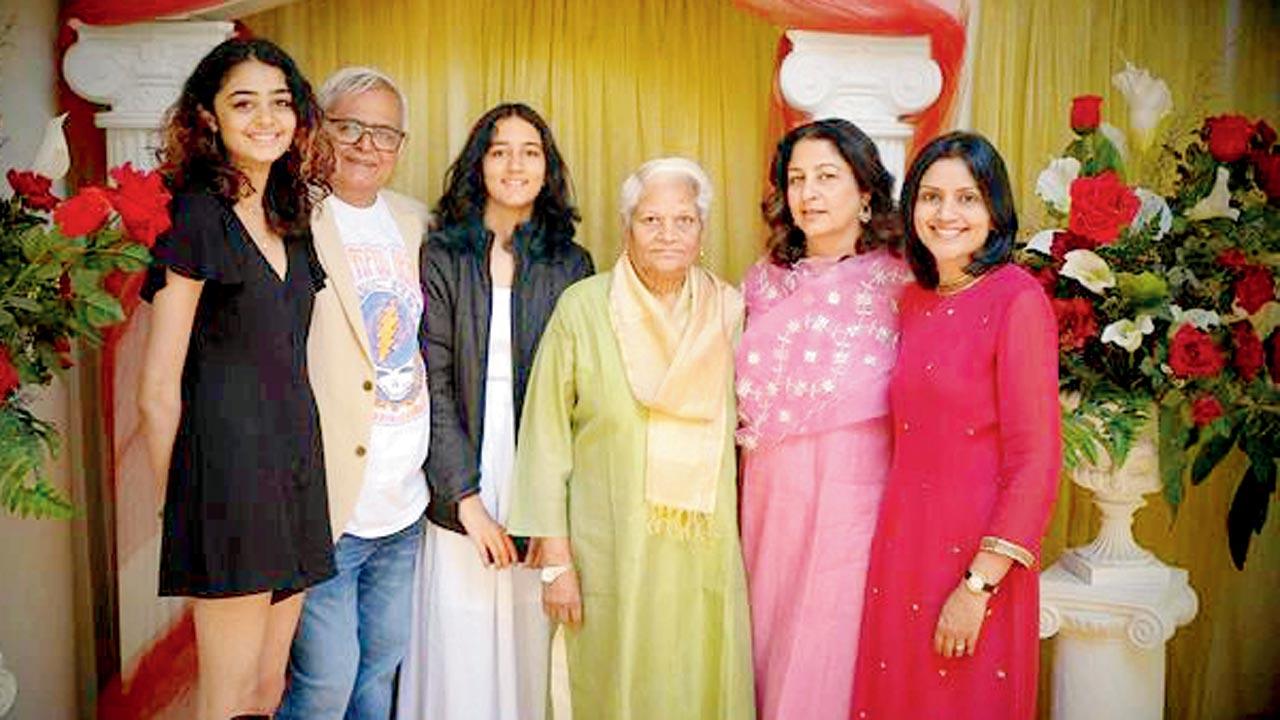 Hansal Mehta and wife Safeena Husain with family at their wedding on May 24, 2022 in San Francisco

After that dinner, the two only met a month later, when Safeena along with a student, visited him in Alibaug where he was shooting for a film. “I was trying to take that internship programme forward,” she says, when we tease her about conspiring yet another meeting. It’s at this shoot, that Safeena narrated her favourites scenes from Dil Pe Mat Le Yaar. “He very romantically told me, ‘Mere to baal khade ho rahe hain’,” she smiles.

The truth, Hansal tells us, was that until then, he had never met a person who had understood his vision for the film that starred Manoj Bajpayee and Tabu. The film’s failure at the box office had left him broken. “I wanted to forget it. There were some memories attached to the film that were not very pleasant. But, here was someone who remembered every single detail. That was enough to get me attracted to her.” 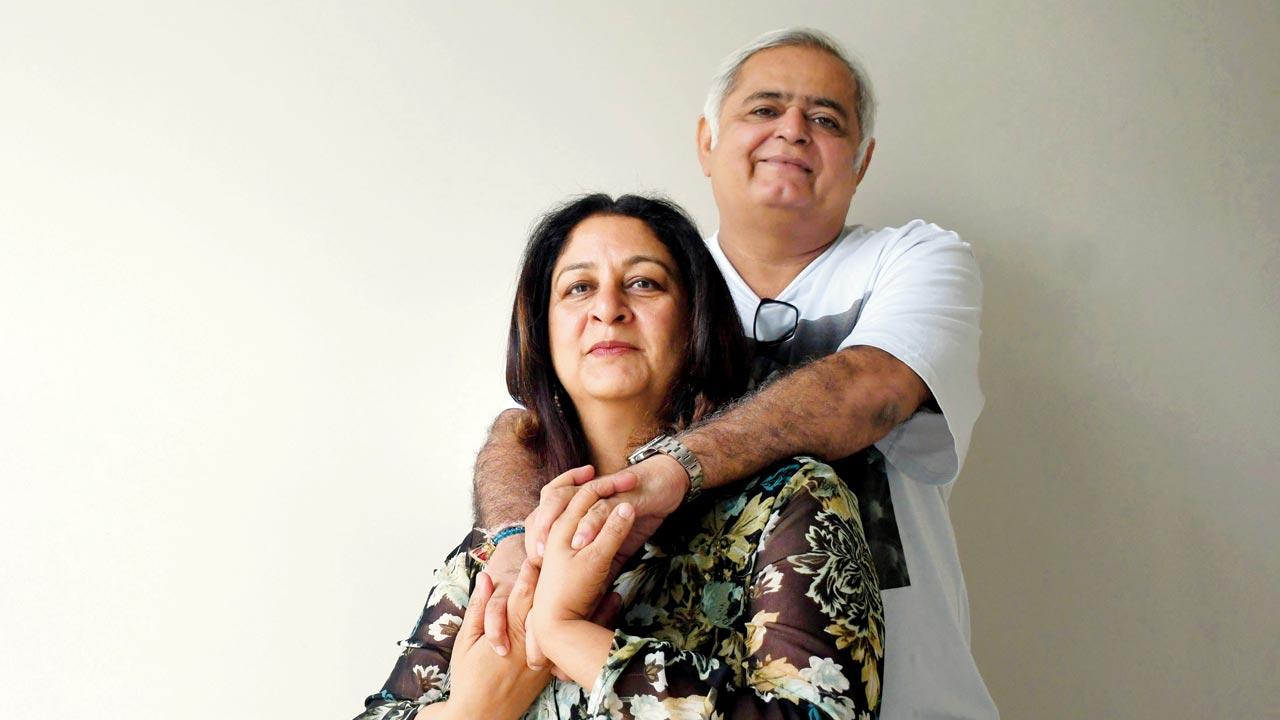 Mehta and Husain say their decision was an impulsive one. Pics/Ashish Raje

Safeena came into Hansal’s life when he was going through a professionally low phase. “It was a phase of despair, to be honest. I was completely lost, and didn’t know what I was doing with my life. I was making these so-called ‘sex films’, so that I could make money out of something... anything. And somewhere, I did feel like I had sold out. Her coming in was almost like a timely reminder that ‘you are that filmmaker, not this’,” shares Hansal.

The couple started seeing each other soon after—a road trip from Ooty to Mumbai followed. “I didn’t realise when we started living together. I used to live very close to her home. She used to stay with her dad in Tarapore Gardens, while I lived in Lokhandwala Complex. Sometimes, I would stay back for days at her place,” he remembers. After Kimaya was born, the two got busy putting their lives in order. Safeena started Educate Girls, a non-profit which focusses on mobilising communities for girls’ education in India’s rural and educationally backward areas. 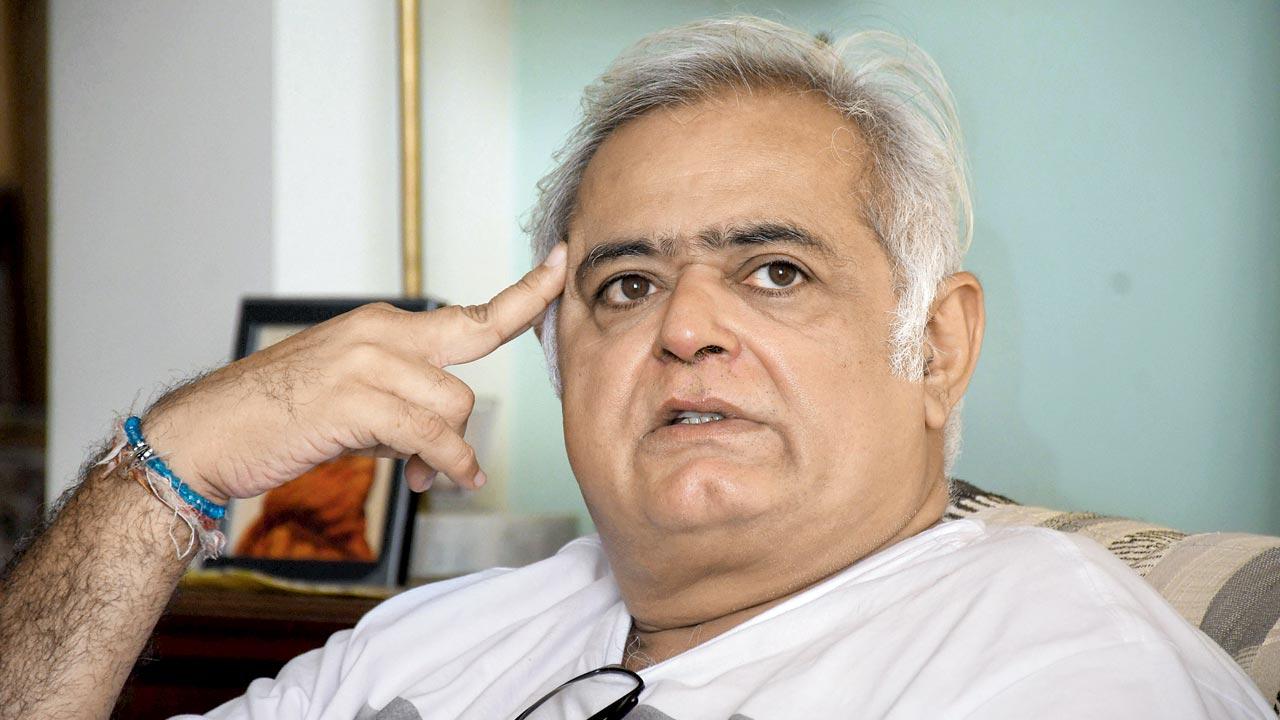 Since they couldn’t see themselves afford a home in the city, they moved to a village in Malavli near Lonavla, living a frugal existence. “We couldn’t afford anything else.”

Hansal, who was still struggling to find a footing in the movies, used that time to help his wife build her organisation. “I made three films during that period [2005-08]. Two of them never got released, and the one that did, Woodstock Villa, wasn’t my kind of work. I remember asking Safeena then, that if I gave up all of this [movies] indefinitely, and did something I really wanted to do, would she be able to support me. She instantly said, yes. That support saw me through 2008 and 2013, until I made Shahid, which received a lot of critical acclaim. Until then, I was hand to mouth. I was not doing any work.” 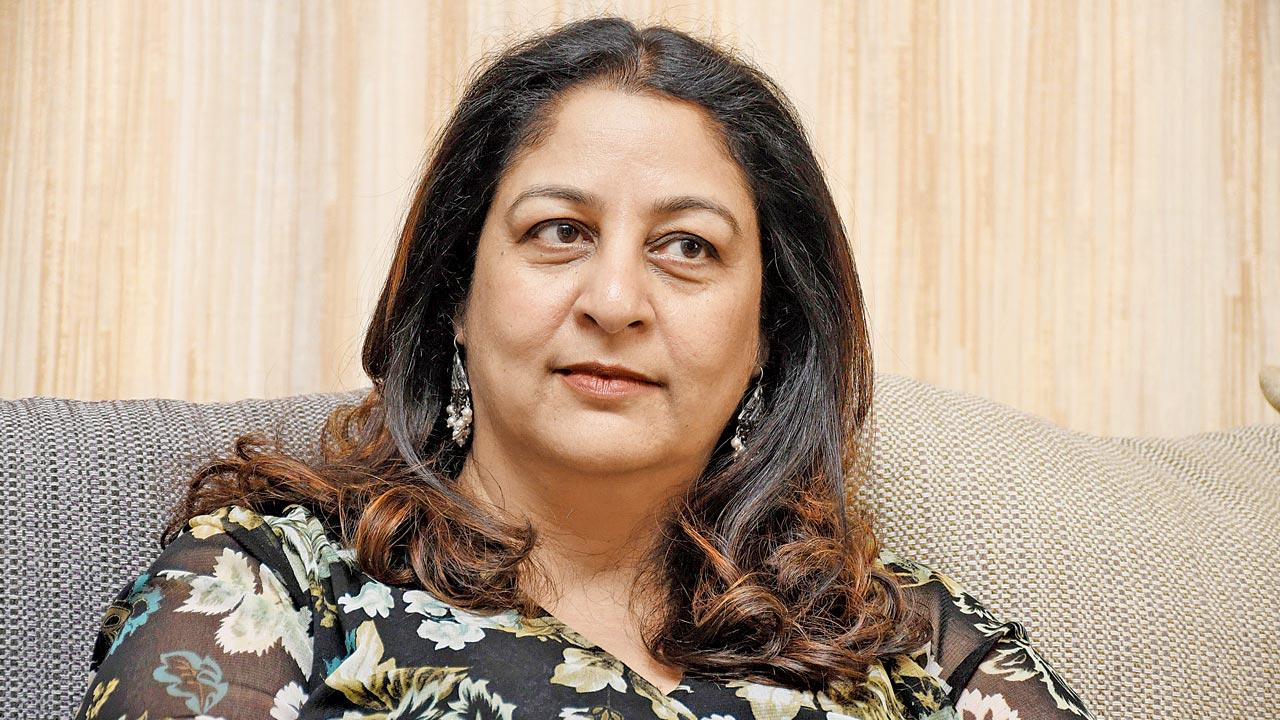 The couple returned to Mumbai after three years, buying their first home together with the help of their parents. “We actually lived the life you live after you marry in your 20s. Everything happened to us 10 to 15 years later. We found ourselves, our voice, and our mission together, and then we were just busy pursuing that mission; marriage as a conversation never came up,” says Hansal, adding, “Until, we had to get a passport for our child.”

One of the reasons why Hansal and Safeena also resisted the idea of marriage was because they had both been married once before. “There was this feeling then that... If you don’t get married, you don’t have to get divorced.” Hansal says that their parents too, didn’t force them. “Safeena’s father lived his life unconventionally. In a way, he inspired us to live just that way. We saw him, and never adhered to the conditioning that was thrust upon us. We sort of imbibed that.”

But the only time they felt the challenge of not having a marriage certificate was when it came to getting legal work done. “We couldn’t apply for a bank loan, or even rent an apartment together,” Safeena remembers.

When it came to getting their daughters’ passports, Hansal says he had to give an affidavit “saying that the child has been out of the wedlock”. “It’s the most ridiculous paper to submit. Unfortunately, this institution [of marriage] has been imposed upon us,” he says.

But the real trigger was Khar Gymkhana, Hansal says with a straight face. Safeena breaks into a laugh.

“That really irritated him. In all the 17 years that I have known him, he hasn’t been to the gymkhana even once, but he still wants the membership,” she shares. “See, my father was a Khar Gymkhana member, and I also spent my early years there. That’s where I developed my love for sports, be it cricket, tennis or swimming. Jai also grew up playing badminton and tennis there. When the time came for my daughters to get a membership, I was asked to show over 20 papers to prove that they are my children. The authorities told me that there are byelaws that cannot be flouted. I had to give them so many affidavits and certificates through the lawyer, for my girls to get the membership. After all this, they didn’t give Safeena the membership. They said I had to get married for that. I was so pissed off.”

Safeena clarifies it wasn’t the gymkhana membership, as much as her father’s death, six months ago to COVID, that made her realise how insensitive the system can be. “There was some money stuck in his bank accounts, and despite being his daughter, I had to go through a lot to even inherit what he left me. I thought, ‘Oh my god, our situation is even more complex’. We didn’t want to make it messy for our children, just because we chose to live our lives differently.”

Hansal says his dear friends, actors Rajkummar Rao and Patralekha had been trying to convince them to get married since forever. “They even suggested that we get married alongside them,” says Hansal. “But we wanted to have an age-appropriate wedding.”

Their decision to get hitched was an impulsive one. They hadn’t told any family member, including their sons, that they were planning this. “Because, we weren’t sure of it either.” Since Safeena is an American citizen, they were able to get dates for the court marriage almost immediately. They left for San Francisco on the spur.

The couple was married on May 24, in front of their daughters and Safeena’s mother and sister, who live there. “We informed them about it only a day before the wedding,” he says, “The moment I got married, I sent the pictures to our family back home. Jai [Hansal’s son], was quite upset. He said, ‘If you had told me, I’d have
been there’.”

The ceremony, Hansal recalls, was an emotional one. “Hansal was crying,” Safeena recounts. “Suddenly, while taking the vows, it just hit me. The spirit of that ceremony is actually sacrosanct. I think we married at the right time, because we understood the meaning of being together.” Safeena adds, “We realised, we had got married for nothing, but love. In the last 17  years, we’ve seen a lot together. We lost our parents, we’ve experienced struggle. And we have stood by each other. Marriage makes it all very real.”

Ever since they returned to Mumbai, they’ve been holding small, intimate celebrations for friends and family. “And can you imagine, the moment that Instagram post was out [announcing the marriage], who messages me?” asks Hansal, leaving little room for us to guess. “The gymkhana president.”

Next Story : The building blocks of Mumbai