In a letter to the home department, NSEL’s new CEO Saji Cherian has written that government officials working on the case will be able to focus better if they are off election duty

Under pressure to act against perpetrators of one of the biggest financial scams in the country, the National Spot Exchange has now put the ball in Maharashtra government’s court. 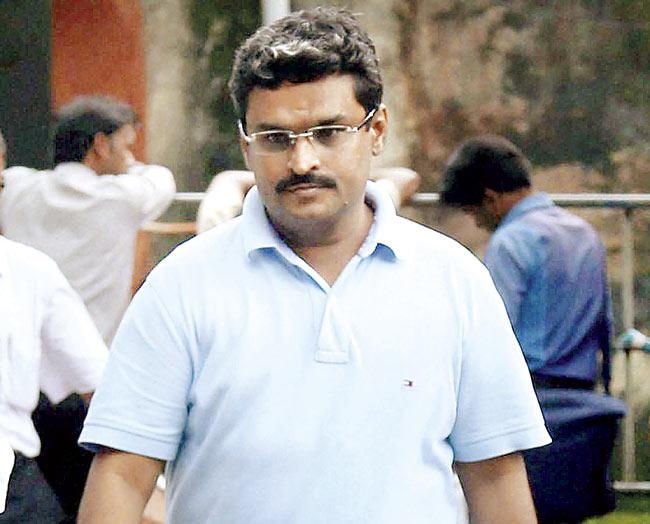 NSEL is a subsidiary of Jignesh Shah-led Financial Technologies India Ltd. Shah is seen here coming out of Kalyan jail after posting bail in the case last month. File pic

The State will likely spare babus working on the case involving the scam at the National Spot Exchange Limited (NSEL) from election duty in the assembly polls, so that victims of the Rs 5,000-crore scam can get justice at the earliest.

The government waiver comes following a request from bourse new CEO Saji Cherian, who wrote to Maharashtra state chief secretary last week requesting speedy justice in the case and waiving of election responsibility from officers working on the case, especially with seizure, attachment and sale of properties belonging to the defaulters and accused in the case.

On Tuesday, the commodity markets regulator, Forward Markets Commission (FMC), slammed the NSEL for making negligible progress in recovery of dues from defaulters. The FMC said NSEL has so far recovered only Rs 360 crore in dues from the defaulting members. FMC had alleged that the spot exchange didn’t have mechanisms in place, its manpower was slow and without focus in recovering the investors’ money.

Babus to the rescue?
The NSEL scam was assessed at a staggering Rs 5,682 crores and the recoverable amount is Rs 5,333 crore. The recovery is to be made from the sale of property belonging to the defaulters/accused in the case, later to paid to as many as 13,000 innocent investors who were the victims.

The Maharashtra Protection of Interest of Depositors (MPID) court has appointed team of officers to facilitate the sale of assets and property; the team is to submit a proposal to the MPID court for sale of assets and commodities belonging to the defaulters.

Sources in the government said the home department will come out with a notification on Monday attaching properties of all defaulters and accused in the NSEL scam. Most of the defaulters have been attached by the Economic Offences Wing of Mumbai Police, and are being tried by the MPID set up under the Maharashtra Protection of Interest of Depositors (in financial establishments) Act.

Cherian’s letter seeks special exemption for Deputy Collector Ajit Sakhare, who has been appointed by the MPID court as the ‘Competent Authority’ on April 17, 2014, to work out a formula on the sale of properties belonging to the accused. “It is known that miscellaneous applications have been filed in the MPID court for sale of assets of defaulters, and recover money from them due to bona fide investors.

MPID has appointed an authority and we request to please exempt him from other duties to ensure justice to bona fide investors as early as possible,” reads the letter. The scam-hit bourse had appointed Cherian in August soon after sacking former CEO Anjani Sinha when the exchange shut down operations following a government order.

Next Story : Devotee claims he was assaulted by Lalbaug mandal volunteers