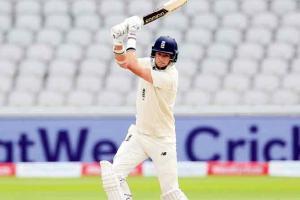 
Stuart Broad starred with both bat and ball (62 off 45 balls and 2-17 respectively) before Jofra Archer (1-55) marked his return to international duty with a wicket on Day Two of the deciding third Test against the West Indies at Old Trafford on Saturday. England had slumped to 280-8 after losing four wickets for 18 runs before No. 10 Broad's swashbuckling 62 took them to a first innings total of 369. He then took a wicket with his fourth ball to have West Indies dangerman Kraigg Brathwaite caught at slip by England captain Joe Root. At stumps, the tourists were 137-6, still trailing by 232 runs.

Earlier, John Campbell, dropped on 10 when normally reliable second slip Ben Stokes put down a routine chance, was starting to look good while making 32. But fast bowler Archer, back after being omitted from England's series-levelling win in the second Test for breaching the bio-secure regulations governing this series, produced a rib-high delivery that left-hander Campbell could only fend to Rory Burns in the gully.

And there was time before tea for James Anderson (2-17) to strike on his Lancashire home ground when a superb delivery from England's all-time leading Test wicket-taker had Shai Hope caught behind. England resumed on 258-4, with Ollie Pope 91 not out and Jos Buttler unbeaten on 56. But Pope failed to add to his score as England struggled against new ball duo Kemar Roach and Shannon Gabriel.

Next Story : No COVID-19 worry for Sourav Ganguly