Should results go against them on Sunday and Monday, Arteta's men could be just two points above the drop zone, with Chelsea to come on Boxing Day 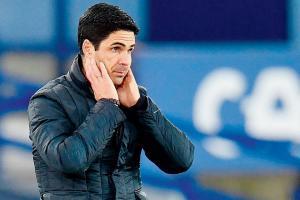 
Arsenal boss Mikel Arteta admitted his players were in a "big fight" after slipping to an eighth defeat of the Premier League season at the hands of high-flying Everton on Saturday. Carlo Ancelotti's side moved five points behind leaders Liverpool after beating the Londoners 2-1 in front of 2,000 delighted fans at Goodison Park. At the other end of the table, the Gunners remain 15th after just one win in their past 10 league games, putting Arteta's position under intense scrutiny just four months after they won the FA Cup. After red cards undid Arsenal in their previous two games, much of the damage was again self-inflicted as Rob Holding's own goal opened the scoring. Nicolas Pepe's penalty briefly levelled the scores, but Yerry Mina's header on the stroke of half-time secured a third consecutive win for Everton.

Arteta said the game hinged on two key moments. "We reacted really well," he told Sky Sports. "We dominated the game. We created enough chances at least to not lose. We hit the bar. We don't have the luck." "The boys are absolutely still fighting," he added. "They're hurt right now." Arsenal were dealt a major blow before kick-off, losing captain Pierre-Emerick Aubameyang to a calf injury. He had just re-found his scoring touch with a first goal from open play in the Premier League since September in a 1-1 draw at home to Southampton on Wednesday. That point briefly stemmed the spiral of decline for Arsenal but the club, who have been in English football's top flight since 1919, find themselves in uncharted territory, facing a relegation battle.

Should results go against them on Sunday and Monday, Arteta's men could be just two points above the drop zone, with Chelsea to come on Boxing Day. Dominic Calvert-Lewin was usurped by Liverpool's Mohamed Salah as the Premier League's top scorer earlier in the day and while the England international failed to score for the third straight game, he did have a big part to play in the opening goal. Former Arsenal winger Alex Iwobi's cross was headed towards goal by Calvert-Lewin, but his effort was going off target until it was turned in by Holding's thigh. Arsenal had been thoroughly outplayed in the opening half-hour, but were gifted a route back into the game when Ainsley Maitland-Niles was fouled by Tom Davies inside the area. In the absence of Aubameyang, Pepe took responsibility from the spot and sent Jordan Pickford the wrong way.

However, Everton's power from set-pieces caused problems all night for the visitors and it was from a corner that the winner arrived, as Gylfi Sigurdsson's wicked delivery to the near post was headed home by Mina. Arsenal responded brightly in the second half and came close to a second equaliser when Pickford dropped a cross into the box and David Luiz's shot came back off the post. Thereafter, Everton were happy to let Arsenal have the ball but the visitors rarely looked capable of getting back into the game until deep into stoppage time, when Pickford made amends for his earlier error by saving from Bukayo Saka. At the start of the campaign, Arsenal's target was a return to the Champions League next season. Now their focus is staying in the Premier League, while it is the Blues who are contenders for a top-four finish. "We have fantastic players on set-pieces, we score lots of goals," Ancelotti told the BBC. "We work on this because we are very dangerous. "We are pleased. The position in the table is really good. But as I said last week, it is not the end of the season, we have to keep fighting."