Videos of Jr NTR, also known as Tarak's lookalike Shaminder Singh has been doing rounds of the Internet. 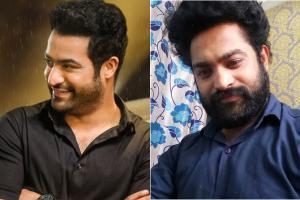 
Where there is a star, there is a fan. And where there is a fan, there is always a doppelganger. And Jr. NTR has just found one! The popular Telugu actor Nandamuri Taraka Rama Rao Jr's lookalike also known as Tarak has created a buzz on social media with NTR Jr's fan groups sharing his videos.

The lookalike, who has been identified as Shaminder Singh is all the way from Bhatinda, Punjab. Shaminder, discovered his new identity when he went without a Sikh turban, his friends told him that he looks like Tarak.

I don't know telugu but I am trying my best to meet @tarak9999 @smkoneru pls sir reply pic.twitter.com/tJfbAHyW0c

Speaking about the same, Singh told The Hans India, "My classmate was the first to say I looked like Tarak and since then, a lot of people said the same, so I searched him up on the internet and was shocked myself."

Don't believe us? Look for yourself:

With the help of such videos, Sharminder has gained huge popularity in no time and netizens started appreciating his talent in imposing the actor on Twitter. Check out Tarak fan's reaction.

Absolutely looking like tarak anna in this video bro

On the work front, Jr. NTR is busy prepping for his upcoming yet-untitled film with S.S. Rajamouli. Currently dubbed as RRR, Rajamouli's film will also star Ram Charan, who will be sharing screen space with NTR for the first time. Jr. NTR will be trained by well-known celebrity fitness trainer Lloyd Stevens.

To be made on a rumoured budget of Rs 300 crore, the film is tipped to be a boxing drama featuring NTR and Ram Charan as brothers.

RRR also has an interesting star cast which includes Alia Bhatt, who will be playing the character of Sita opposite Ram Charan. The actress has been taking Telugu classes for the same. The actress recently revealed that she bagged the film through a chance encounter with Rajamouli. Says Alia, "I had bumped into Rajamouli sir at an airport and I begged him that whatever part he has (for me) I will do it. That time he had not cast for the girl yet. He said he was anyway talking about my timelines. So I told him whatever be the timelines, I will make it happen. We made it happen."

Apart from the Kalank star, the movie will also see Ajay Devgn in a cameo appearance. It is scheduled to release on July 30, 2020.

Next Story : Lakshmi Manchu's fan gets her face tattooed on his arm