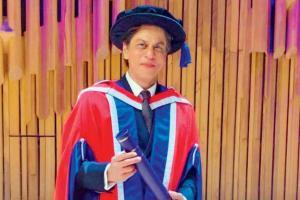 
Shah Rukh Khan was conferred an honorary doctorate by the La Trobe University, Melbourne, for his work supporting women's empowerment and his achievement in the Indian film industry. Named after his mother, Khan's Meer Foundation helps acid attack survivors.

SRK said, "This is not an award for anything the Meer Foundation might have achieved. It is for the courage of every woman who faces the brutality of injustice, inequality, and inhumanity." He has earlier received doctorates from the University of Bedfordshire and University of Law in UK and University of Edinburgh in Scotland.

Shah Rukh Khan was also recently awarded with the Excellence In Cinema award at the Indian Film Festival of Melbourne. After receiving the award, SRK said, "Thank you all of you in Melbourne. It's an honour and privilege for me. Awards are odd because to me an art form judged for its quality feels counter-intuitive. Art is an expression and cinema is the ability to create emotions and share experiences through stories. To be an actor is to live to know that each one is a mere illusion. When you are making a movie you can change a lot by changing the angle of the light and it strikes you that life is a lot like that as well. It's the simple things that can alter your journey and pondering makes your story worth telling..."

Filmmaker Karan Johar, who also attended the festival, added, "Shah Rukh Khan represents superstardom. I firmly believe the era we belong to, the term is understood only because of him. It's not just about his large heart but his tremendous presence and aura."

On the work front, Shah Rukh is co-producing a horror series, Betaal, for a streaming service. It is written and directed by Graham and co-directed by Nikhil Mahajan. It will be co-produced by Gaurav Verma, Red Chillies Entertainment and Netflix. This will mark as the third collaboration of Shah Rukh Khan with Netflix, after Bard of Blood, featuring Emraan Hashmi, and Class of 83 with Bobby Deol.

SRK was last seen along with with son Aryan lending their voices to The Lion King's Hindi version. While SRK voiced the character of Mufasa, Aryan lent his voice to Mufasa's son, Simba. The film released in India on July 19 in English, Hindi, Tamil and Telugu.

Next Story : See Photos: Prateik Babbar and Sanya Sagar are holidaying in LA