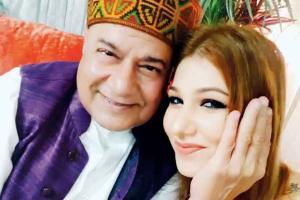 
Jasleen Matharu is the latest contestant to be shown the door in Bigg Boss. Her eviction will be shown in tonight's episode of the Salman Khan-hosted reality show. In her three-month-long stint inside the house, Matharu hit headlines owing to her alleged romance with bhajan maestro Anup Jalota. Her revelation of dating the singer, 65, for the past three years came as a shock to her family as well as viewers.

However, having been eliminated from the controversial show, Matharu now has a different story to offer. "I am 28 and he is 65. I was shocked that it had become a national issue. I Googled all that was written about me; I saw the memes about Anupji and me," she says.

Point out to her that she had claimed to be involved with him, on national television, and she cuts in, "Our affair is a prank gone horribly wrong. As the show's theme was jodis, I suggested that Anupji come along; we were a guru-shishya jodi. But when Salman was introducing the housemates in the opening episode, I joked that I know Anupji for three years and that we are together. Anupji was taken aback and did not react. Had he reacted then, the matter would have ended there. I continued the joke inside the house, and he played along. But when he realised things were going too far, he was scared."

Their public display of affection — especially when she smothered him with kisses in an episode — did not miss anyone's notice. "I kissed him on the cheek and forehead. There was nothing romantic about it."

Next Story : Swara Bhasker plays a Maharashtrian cop in Flesh