Simone Singh on 4-year sabbatical: Have no fear of being away

Simone Singh, who is currently seen as Sneha Patel in web series, Four More Shots Please! gets candid with mid-day.com about her role and challenges 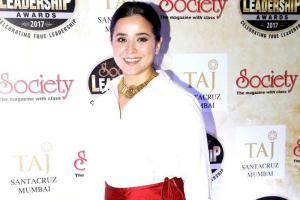 
After a four years sabbatical from the industry, Simone Singh is finally back and how! The actress, who is remembered for her roles in Ek Hasina Thi, web series Haq Se and other diverse roles in films, is back with Four More Shots Please! Simone plays an interesting character of Maanvi Gagroo's mother, named, Sneha Patel. Talking about its challenges and the avenues opened by the digital space, Simone gets in an exclusive conversation with mid-day.com

Tell us about your character in four more shots, please

Sneha Patel is a woman, who has very carefully cultivated this image of perfection for her, and for the family that she presents to the world. Unfortunately, her daughter doesn't meet those rigorous standards that she has set for. It's a constant struggle for her to have a rebellious daughter, and that's not conforming to the image that she presents. It's very much a character study for a person, whose outlook has been shaped from her own that she has suffered because of societal expectations. This keeps them stuck in a particular way of thinking.

Does portraying such a daunting character take a toll on you?

No. It's very empowering on you in the sense that it gives you an insight into other people's lives. When I first read the character, you feel it's exaggerated a little because people don't really think like this but apparently people do. The feedback I have received says, 'Yes this is our lives, and we know people who live and think exactly like this.' It opens up one's own thought process. There are people with different point of views that you thought didn't exist. It's very enriching to play characters like these that are so vastly different from myself and my life experience.

What best can a mother and daughter do to make their relationship better?

I'll say from the relationship based with my own, who passed away many years. I think with any relationship, an acknowledgement of each other's humanity is very important. For a parent to try not to mould their children into what they wish for them to see. To carve them in the mould of their own expectations is very limiting for the child. They should come from a place where they allow the child's own personality to blossom. Also, build a relationship of trust where the child safe to share their life with the parent.

Your husband Fahad Samar is playing your reel husband in the show, how was it working with him?

It was so much fun. We looked at each other and said, 'This is our first.' We really enjoyed but weren't sure what's it is going to be like in playing characters as opposed to...

Was he comfortable facing the cameras for the first time?

The feedback that Fahad has got from everyone is that he was very natural on screen. He comported himself incredibly well for the first time that he was facing the cameras.

You've done several tv shows, web shows and films, but you are still known as the Heena actor. How do you feel when you are still acknowledged by Heena's character?

Different people have different perspectives on this. Even though Heena was such a powerful role, and left an impactful impression on people's minds but a lot of people have told me that I have transcended that character. So, it depends on each one of their perspectives. If people remember me as Heena I can only take that as a huge compliment because it obviously left an indelible on their minds. I can only have gratitude for that. And, also for the fact that everything I have played after that is vastly different and that has been very important. When you're talking about Heena, there are a lot of people who say that my character Sakshi left an indelible impact on people because it was so strongly written.

Your last show Ek Hasina Thi was in 2014. And you returned in 2018 with a web show called Haq Se. Was it a planned leave?

No, it wasn't a planned leave or a strategic move. I think one must respond to life and opportunities as they come. When you take up a project, your life changes, your entire time is dedicated to that project. So, that becomes a big factor in your life. So, unless there is something that can move me as a project or the character that I am playing. These are the factors I take into consideration, it's not about how much time has been lapsed or it's not about having to stay in the public eye.

Do you mean that you have no fear of missing out from the circuit?

No, I never felt that. I have no fear of being away from the public consciousness.

How has your experience been working in the digital space?

The digital space is very exciting for everyone. For the content and certainly for the actors. It's an exciting platform just because the stories that you can tell, the characters that you can portray, the nuance with which you can explore stories, and characters are amazing. It's such a rich opportunity. I think that is what draws people to this platform.

I've finished shooting for a film, it's working title Hunter. I am really excited about this project because it's an incredible script.