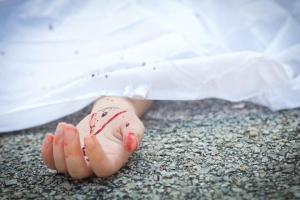 
A dismembered body of an unidentified woman was found stuffed in a suitcase and polythene bags near a closed factory in Safedabad area here on Tuesday night. The police reached the spot on Tuesday night after being informed of a suspicious suitcase lying in the area. Circle Officer Sushil Kumar Singh said, "On opening the bag, body parts of a woman in her late 20s were found inside."

According to Singh, some polythene bags were also found nearby contained the head and one of the legs of the woman while the remaining body parts were inside the suitcase.

Superintendent of Police Arvind Chaturvedi said that the body appeared to be around two days old and locals noticed the bag due to the foul smell emanating from it.

The SP said, "It appears that the victim, who is yet to be identified, was murdered somewhere else and her body was disposed of here. We are probing the matter."