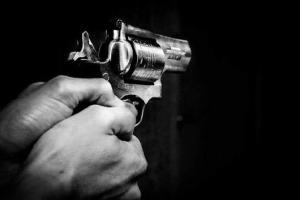 
The police have arrested Daya Shankar Agnihotri, an accomplice of history-sheeter Vikas Dubey in Kalyanpur here. Agnihotri was arrested in the wee hours of Sunday following an encounter last night, said Kanpur Police. The police shot in Agnihotri's leg. IG Zone Mohit Aggarwal had declared a reward of Rs 25,000 to find him.

The accused person opened fire at the police late last night while police were coming to arrest him. Police have recovered a gun and cartridges from Agnihotri's possession. Dubey is the main accused in the Kanpur encounter case, in which a group of assailants opened fire on a police team which was trying to arrest a criminal in the city late on Thursday night, a senior police official said.

Meanwhile, Uttar Pradesh Police have increased the prize money from Rs 50,000 to Rs 1 lakh for the arrest of Dubey.

Uttar Pradesh Police on Saturday said that it will seize illegal properties and money in Dubey's bank accounts under the Gangsters Act, following which Lucknow Police seized the vehicles parked at his residence in Lucknow.