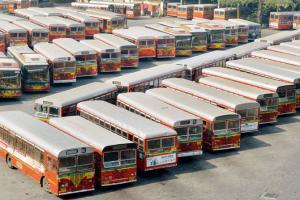 
With the BEST strike entering the eighth day on Tuesday, the undertaking has already incurred a loss of more than Rs 20 crore. In view of the fact that there have been no signs of the deadlock ending, the Bombay High Court has asked the high-powered committee appointed to redress the grievances of BEST workers to submit a report in a sealed envelope on January 15.

Even though earlier in the day Chief Minister Devendra Fadnavis and Shiv Sena Chief Uddhav Thackeray met post a meeting at the Mantralaya to find a solution to the problem, they could not end the stalemate. Shiv Sena has been unable to end the strike despite its affiliated union - BEST Kamgar Sena - announcing a day into the strike that they would not be a part of the protest.

Meanwhile, the Maharashtra Navnirman Sena (MNS) tried to stop Metro and Coastal Road works at certain places and said that they would not allow them to proceed till the government steps in and brings a solution to the BEST strike. However, no work was affected.

Sources said that some MNS leaders even tried to harass passengers by forcing them to get off buses run by the Navi Mumbai Municipal Corporation. According to MNS leader Sandeep Deshpande, the party has taken up the cause of BEST workers. He alleged that the state government was keen on building new infrastructure than focusing on what is already there.

Next Story : Food nirvana: 7,000-sq-ft full of only kilo-plus crabs in Mumbai