In G North ward, Dharavi has 30 new cases, the highest number reported in a single day, which included five cases from Shastri Nagar and another eight cases from another slum pocket identified as a high-risk area 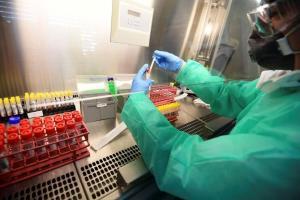 This picture has been used for representational purpose only. Photo: AFP


The steep rise in the number of COVID-19 cases in the city continued as 308 new ones were reported on Monday, taking the total count to over 3,000 cases. Meanwhile, civic officials said that Kasturba Hospital would soon start plasma therapy for COVID-19 patients who are unable to fight the infection on their own.

In G North ward, Dharavi has 30 new cases, the highest number reported in a single day, which included five cases from Shastri Nagar and another eight cases from another slum pocket identified as a high-risk area. Only three of the patients were senior citizens while majority of them were people in their late 20s or early 30s.

Dharavi now has a total of 168 COVID-19 cases while Dadar reported three new cases on Monday.

Civic officials said that with the growing number of cases, they were trying to ensure that all private hospitals remain functional and that includes Wockhardt Hospital where more than 80 staff members have tested positive. A civic official from the health department said, "We have issued a letter to the hospital to open up and function as a private COVID hospital. However, the hospital officials said that they didn't have enough staff and needed a day or two to start operations."

On Monday, E ward (includes areas like Mumbai Central, Byculla and Madanpura) reported 45 new cases. Samajwadi Party leader, Rais Shaikh blamed the BMC for the rising numbers. "This ward now has 257 cases. Even Kasturba Hospital in Chinchpokli falls under E ward. I have written to the civic commissioner about the worrying situation in the area and it is only getting worse. I have demanded that exhaustive measures be taken to prevent community transmission in the area," he said.

According to the World Health Organisation, the empirical use of convalescent plasma could be a potentially useful treatment for COVID-19. Civic officials said while Nair Hospital had been designated as a collection centre, plasma therapy would be done at Kasturba Hospital and they were in the process of getting approval from the Indian Council of Medical Research.

State health department officials said that 466 new cases were reported in Maharashtra of which 391 were in the Mumbai Metropolitan Region. Nine deaths were reported in the state of which seven were in Mumbai. According to civic officials, While five patients died on Sunday, two died on April 18.

After two staff members from the BMC's disaster management cell tested positive, the unit at the headquarters at CST has been fumigated and sanitised. While there were reports on Monday morning that the control room has been sealed, in a press statement the civic body said that the unit was functioning partially and the rest of the staff members were working from the Parel control room.