The bench allowed the appeal filed by a law student and set aside the Allahabad High Court order, which directed Chinmayanand be provided a copy of the statement made by the complainant in the case 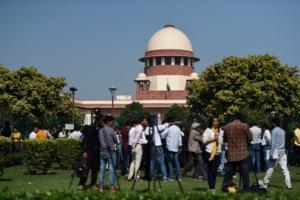 
The Supreme Court on Thursday said in matters of sexual exploitation there is a need to maintain utmost confidentiality, as it denied former BJP MP Swami Chinmayanand access to the statement of a complainant, who filed a rape case against him before a magistrate under Section 164 of the Code of Criminal Procedure.

A bench headed by Justice UU Lalit and comprising Justices Vineet Saran and Ravindra Bhat said: "In our view, the High Court completely erred in appreciating the directions issued by this Court, especially in a matter where the offences alleged against accused are of sexual exploitation. In such matters utmost confidentiality is required to be maintained. In our view, the High Court completely failed in that behalf."

The bench allowed the appeal filed by a law student and set aside the Allahabad High Court order, which directed Chinmayanand be provided a copy of the statement made by the complainant in the case.

"Though, a copy of the statement recorded under Section 164 of the Code was made over to the accused, we must set aside the order passed by the High Court and lay down that under no circumstances copies of statements recorded under Section 164 of the Code can be furnished till appropriate orders are passed by the Court after taking cognizance in the matter," said the top court.

The bench noted that the logical extension of the directions passed by apex court, no person is entitled to a copy of statement recorded under Section 164 of the Code till the appropriate orders are passed by the court after the charge-sheet is filed.

"The filing of the charge-sheet by itself, does not entitle an accused to copies of any of the relevant documents including statement under Section 164 of the Code, unless the stages indicated above are undertaken", noted the bench.

In November 2019, the top court had granted an interim stay on the High Court order, which granted Chinmayanand access to the certified copy of the statement. The victim had challenged the High Court order and contended that the copy of her statement cannot be accessed before the filing of the charge sheet.

The victim had said that such practice would be contrary to law and may have a far-reaching effect in all cases of sexual offence against women.

Chinmayanand was arrested by the SIT on September 21, 2019, and sent to jail.

The 23-year-old complainant was also booked on charges of extortion. Chinmayanand was granted bail in February this year by the Allahabad High Court.