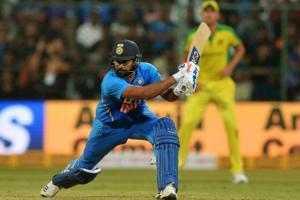 Rohit Sharma plays a shot during the third and last one day international (ODI) cricket match of a three-match series between India and Australia at the M. Chinnaswamy Stadium in Bangalore on January 19, 2020. Pic/ AFP


Australian fast bowler Josh Hazelwood is one of the fiercest pacers in the sport today. Hazelwood, who usually can get the better of many batsmen, discusses the strengths of India's opening star batsman Rohit Sharma.

Speaking exclusively on Star Sports show Cricket Connected, Australia fast bowler Josh Hazlewood talks about Rohit Sharma’s greatest strength, "He's got many. I think it's just with how the ease that he plays, especially anything back of a length, anything short, just puts it away with such ease. It’s just an area in which he gets better, I think. He never looks to bludgeon the ball, just pure class and elegance. His records, especially in white-ball cricket, is phenomenal."

Question: This grace that you mentioned. Does that annoy a bowler more? Just how easily he will play a very good ball as it was too easy…

Josh Hazlewood: "Yeah, absolutely. I mean the batters through our time, obviously are the frustrating ones to bowl to. Even when someone who came quicker like Mitchell Starc or Pat Cummins’ bowling to those guys, it doesn’t seem fast and that’s probably the one thing that sticks out when you are bowling to these types of players."

While talking about bowling to India skipper Virat Kohli, Josh Hazlewood said, "I think we try to probably stay clear of engagement, obviously. I think that was fully evident throughout the series. I think he likes to get in that tussle and it probably brings out the best in him, especially when he’s batting, that was always a no-go-zone for the bowlers. I think it’s a different case if the guys are batting and he’s in the field, you know they can get him engaged there and sort of work him out a little bit if possible, but certainly when he was batting, it was just leaving him to his own devices, and hopefully, we get him in a bit of a switched off mood and take advantage of that."