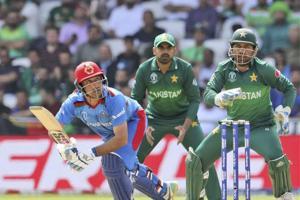 
Clashes erupted between fans of the Afghanistan and Pakistan cricket teams during the 2019 World Cup match between the two sides in Leeds on Saturday.

While videos kept surfacing on Twitter of clashes between the two sets of fans outside the stadium throughout the first half of the game, media reports from the spot said that fans had to be evicted from the Headingley Cricket Ground.

Those evicted reportedly continued the melee outside the stadium and a few journalists who were trying to film the scenes were also allegedly harmed. There have also been reports of fans entering the stadium illegaly and occupying seats.

Among the videos on Twitter is one in which shows what looks like Afghanistan fans beating up a spectator wearing a Pakistan jersey while another shows another set of fans clashing with security personnel. Most tweets from the ground also implicate the Afghanistan fans of causing the ruckus.

Additionally, there were also videos of two airplane banner messages. While one said "Help end dissapearances in Pakistan," the other said "Justice for Balochistan."

Next Story : Dhoni must bat at 4 says Dean Jones