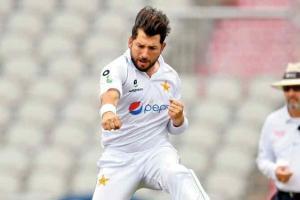 
Yasir Shah took three wickets after lunch as Pakistan dismissed England for 219 to tighten their control of the first Test on the third day at Old Trafford on Friday. The leg-spinner ripped through England's middle and lower order with a burst of three wickets for four runs in 27 balls on his way to figures of 4-66 in 18 overs.

England, who had been 159-5 at lunch in their first innings, lost their last five wickets after the break for 60 runs.

At the time of going to press, Pakistan were 99-4 in their second innings in the post-tea session, an overall lead of 206. Asad Shafiq and wicketkeeper Mohammad Rizwan were batting on 28 and 21 respectively. Shan Masood, who batted nearly eight hours for a Test-best 156 in the first innings, was out for a duck when caught behind down the legside trying to glance a poor ball from Stuart Broad.

Earlier, England resumed on Friday with 92-4, which represented an improvement on their dire position of 12-3 on Thursday. Ollie Pope was 46 not out and wicketkeeper Jos Buttler on 15. Buttler, with just one hundred from his previous 44 Tests, was under pressure to score runs after costly mistakes behind the stumps. He dropped Masood on 45 and then missed a chance to stump him on the same score—errors that intensified a debate about whether the World Cup-winner should remain England's red-ball gloveman.

Next Story : Top Indian players not keen on taking families to UAE