Incidentally, Bale, who was benched for Reals last seven games, including Thursdays nights title-deciding win 2-1 over Villarreal, turned 31 on the same day. 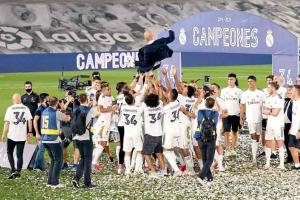 Incidentally, Bale, who was benched for Real's last seven games, including Thursday's night's title-deciding win 2-1 over Villarreal, turned 31 on the same day. So, it should have been a double celebration for the Welshman.

However, it was far from that. Throughout the group celebration and even when the champions were presented the trophy at the Estadio Alfredi Di Stefano, Bale remained on the fringes. Images doing the rounds on social media showed him once softly punching the air and on another occasion, hopelessly trying to trip his teammates, who were running around with joy.

Bale's restrictive celebration however, was most evident when he stood away with his hands folded while the Real players threw manager Zinedine Zidane into the air.

Bale's relationship with Zidane has strained over the recent months and though neither party has admitted there's a problem, Spanish media reports claim that things between the duo are currently "worse than ever." In the pre-match press conference however, Zidane said: "The question about Gareth again! We are interested in the game, just like Gareth is. You [media] are always trying to put things between us but you will not succeed."

Some football pundits have suggested that Bale's cold celebration could be an indication that the player is on his way out.