EPL: No need for Reds to be busy in winter, says Klopp

The European champions secured the signing of Japanese international Takumi Minamino before the window even opened in December, but the former Salzburg midfielder is their only new recruit over the past month. 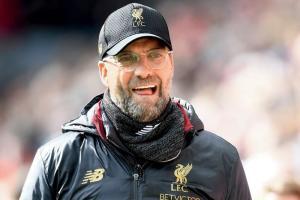 
Liverpool: Liverpool manager Jurgen Klopp said the Reds' forward planning meant there was no need to be busy in the January transfer window as they close in on a first league title for 30 years. Klopp's men are 19 points clear at the top of the Premier League with just 14 games remaining.

The European champions secured the signing of Japanese international Takumi Minamino before the window even opened in December, but the former Salzburg midfielder is their only new recruit over the past month. "The better the season is, the better the squad is, the less you have to do, the more you are happy with the players you have," said Klopp on Friday.

"Which is always the plan in the summer, that you don't have to be too busy in the winter. "Injuries can change these ideas a lot -- and we had injuries, but most of the players are back or coming back." Liverpool can extend their advantage at the top to 22 points with victory over an in-form Southampton at Anfield on Saturday.

Danny Ings has been the catalyst for the Saints climb up the table in recent weeks with seven wins in their last 11 games. Ings left Liverpool for St Mary's in 2018 after an injury-ravaged spell at Anfield and Klopp is delighted the 27-year-old has refound form and fitness with 14 goals in 24 league appearances this season.

"Everybody in this building is so happy about the situation of Danny. Even if he is not anymore, he is still our boy, kind of, and we all follow each step of his career," added the German. "We are celebrating goals he scores -- that will be different tomorrow obviously, but apart from the games against us we couldn't wish him better than we do. He is such a wonderful person."