Did you know Atletico Madrid star Saul Niguez comes from a football family? Take a look at the interesting facts about the La Liga footballer 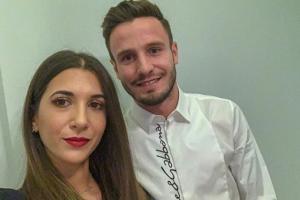 
How much do you know about his footballing heritage, his Real Madrid past, his international pedigree…

1. Saul Niguez comes from a true footballing family
To say Saul comes from a footballing family would be an understatement. His father Jose Antonio played professionally between 1981 and 1994, most notably for hometown club Elche, while both his brothers are professional footballers too. 35-year-old Jony has had a journeyman career and is currently on the books at Elche, while 31-year-old Aaron is a winger at Malaga CF. None have reached the heights that Saul has, though.

2. Saul Niguez started his career at Atleti’s big rivals, Real Madrid
Saul may be Atleti through and through, but he actually started his career across town at the Santiago Bernabeu aged just 12 in 2006. Within just two years, though, he’d joined Atleti, where he’s been ever since. He’s not the only Atleti star to have been on the books at Real Madrid, though, with Alvaro Morata, Antonio Adan, Marcos Llorente and Mario Hermoso having also worn the white shirts of their cross-city rivals.

3. Saul Niguez has a unique Atleti-themed tattoo
Saul Niguez has a number of tattoos, but none are as curious as the personalised football crest he has inked on his left arm: a fusion of the Atleti and Elche – his hometown club – badges. He may have been linked to a number of clubs across Europe over the years, but it’s clear that there are only two clubs close to his heart…

4. Saul Niguez has represented Spain at every level
Saul kitted up for Spain for the first time in 2009 at U16 level, before going on to represent his nation at U17, U18, U19, U20 and U21 level before making his senior debut in 2016. Since then he’s picked up 19 caps, representing his nation at the 2018 World Cup in Russia.

5. Saul Niguez starred in La Liga's first-ever behind the scenes documentary
Saul Niguez was one of the six stars to be featured in the first season on Six Dreams, LaLiga’s behind the scenes documentary following leading personalities throughout the 2017/18 season, alongside the likes of Athletic Club forward Iñaki Williams and Real Betis’ Mexican star Andres Guardado. The second season, following the likes of Santi Cazorla and Aritz Aduriz, is set for release shortly.