In the 2019-20 season, Salah has scripted nine assists, only behind teammate Trent Alexander-Arnold and Manchester Citys Kevin De Bruyne 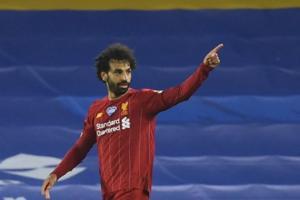 
After scoring a brace against Brighton, Liverpool's Mohamed Salah has joined a trio of Liverpool legends in a prestigious club.

Salah has also now reached 100 goal involvements for Liverpool in the Premier League, tallying 73 goals and 27 assists to achieve the feat in only 104 appearances, Goal.com reported.

In the 2019-20 season, Salah has scripted nine assists, only behind teammate Trent Alexander-Arnold and Manchester City's Kevin De Bruyne.

In the match against Brighton, Liverpool, who has already secured the Premier League title, got its first goal in the sixth minute of the match as Salah registered the strike.

Two minutes later, Jordon Henderson increased the lead for Liverpool as he registered the second goal for the Reds.

After managing to hang on in the first half, Brighton was able to peg one goal back just before the half time as Leandro Trossard registered the strike, bringing the scoreline to 1-2.

The ball possession was maintained by Liverpool in the second half. As a result, Salah got the match-winning goal in the 76th minute. After that, no other goals were scored and Liverpool secured a 3-1 win.

Liverpool now holds an unassailable 23-point lead at the top over second-placed Manchester City. The side will now take on Burnley on July 11.