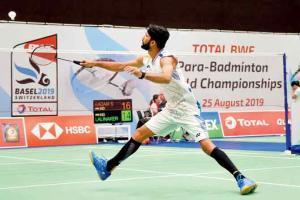 
INDIA'S World No. 5 para badminton champion Sukant Kadam is a Sports Authority of India Target Olympic Podium Scheme (TOPS) athlete. However, Kadam, 27, a Taluka Sports Officer (TSO) for the last two years in Maharashtra's Sangli district, has been struggling financially. He is awaiting his salary for a period of nine months during which he attended National camps and was playing international tournaments (between April and December last year).

Knee problem Kadam, who suffered a serious left knee injury, restricting his movement while playing tennis-ball cricket at the age of 10, studied to become a Mechanical Engineer. He developed an interest in badminton under the guidance of Pune-based coach and Olympian Nikhil Kanetkar.

Kadam is classified in the SL4 injury category of para badminton, began last year winning gold at IWAS (International Wheelchair and Amputee Sports) World Games in Sharjah in February. He then won bronze at the Turkish Para-Badminton International in Antalya in March. In April, he won a bronze at the Dubai International followed by a silver in Uganda. The following month he clinched a bronze at the Canada International and then another third place medal in June at the Irish International. However, while he was winning medals abroad, back home he was not receiving his salary. "In 2019, I got my salary for the first three months till March but thereafter, while I was away, I was not paid from April to December. During that period, I was also at the National camp preparing for my Tokyo Paralympics qualification. I met then state Sports Minister Vinod Tawde to help get my dues," Kadam told mid-day from Sangli. 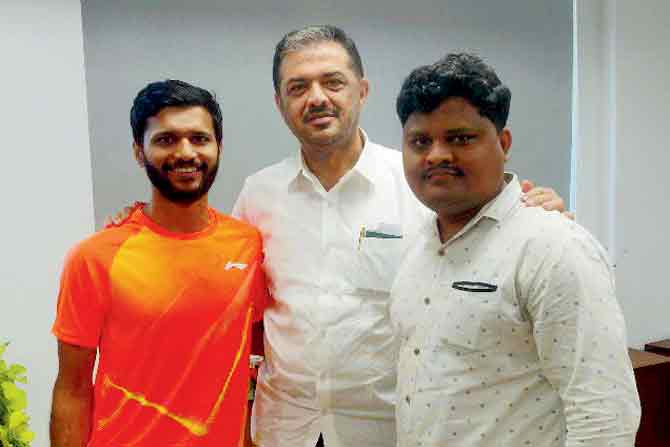 Interestingly, being a bronze medalist at the 2018 Asian Para Games in Indonesia, Kadam is eligible for a Class One officer [in the rank of Deputy Collector] post, but despite approaching the state authorities, he continues to hold a Class Two TSO position which was given to him after his bronze medal win at the 2016 Asian Para Badminton Championship in China.

"As per the state government's regulations, a bronze medalist in the Asian Para Games or Paralympics is eligible for a Class One job. So, when I won the bronze in Indonesia in 2018, I applied for the Class One post of Deputy Collector. However, for the last two years, I've been following up with the authorities, but without success. A few months ago, I met Maharashtra's Sports Minister Sunil Kedar and his deputy, Aditi Tatkare and told them my problems," explained Kadam, who is currently practising with former National player Dhiraj Kumar in Sangli.

Sports minister Kedar however, feigned ignorance when asked about Kadam's case. "He has not written anything to me… nothing at all. He has not even met me. I always prefer to sort out such problems immediately and never keep any issues pending. If he is a Taluka Sports Officer, his issue of [pending] salary should be solved at the District Sports Officer or Deputy Director of Sports level," Kedar said.

Kadam, though, showed us photographs with Kedar and also a signed letter by the minister.

Sukant Kadam's coach Nikhil Kanetkar believes his ward is good enough to win an Olympic medal at the Tokyo Paralympics next year. Kadam was training hard earlier this year, preparing for the 2020 Games's qualification tournament that was to be held in Spain from March 9, before the Coronavirus-caused lockdown halted sports worldwide. "Sukant is World No. 5 and must enter the Olympic qualifying tournaments with the mindset of winning it. He definitely stands a good chance of winning a medal in Tokyo because he has achieved so much international success," said Kanetkar, who represented the country at the 2004 Athens Olympics.