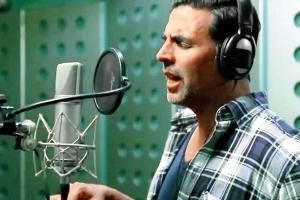 
Akshay Kumar is no stranger to the recording studio, having lent his voice to tracks in Singh Is Kinng (2008), Special 26 (2013) and It's Entertainment (2014). Now, taking his singing skills a notch higher, the superstar is apparently ready to turn rapper for Housefull 4.

A source reveals, "Farhad Samji, who was one of the directors of It's Entertainment, had convinced Akshay to croon the title track for the comedy. This time too, it was his idea that Akki explores his rapping skills. While producer Sajid Nadiadwala jumped at the idea, the producer-director duo then convinced their leading man to give his nod. The Tanishk Bagchi composition is yet to be recorded. The makers are yet to decide if it should be a solo track or one that sees him croon alongside Mika Singh."

While the reincarnation comedy sees Bobby Deol and Riteish Deshmukh as his partners-in-crime, the promotional track will be shot solely on Kumar. We reached out to Kumar and Nadiadwala, who remained unavailable for comment.

Next Story : Vidya on making a debut as a producer: Powerful story called out to me