One of the residents from the hospital said that there has been tremendous pressure on them since the class IV workers which include nurses, ward boys and helpers have been working for fewer hours 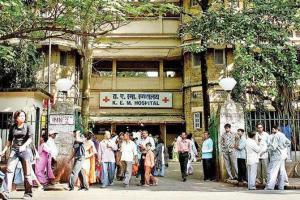 In the video, a resident doctor of KEM hospital appealed to the public to come and help out in the hospital since 'the staff has run away'


Frustrated with the state of affairs, residents of KEM hospital took to social media to complain about the acute shortage of nurses and helpers in the wards. A video circulating in various social media platforms showed a ward with 35 patients who were being managed by three resident doctors since nurses and ward boys had allegedly not reported to duty.

In the video, a resident doctor says that there are no nurses or ward boys available to take the patients to the toilet or to give them drinking water referring to the condition of government hospitals as 'pathetic'. One of the residents from the hospital said that there has been tremendous pressure on them since the class IV workers which include nurses, ward boys and helpers have been working for fewer hours. "They have transportation issues and other complaints due to which they are not showing up to work. The entire load is on the residents and we are overburdened with work. Our job is to treat patients but instead we are changing their diapers and urine bags," said the resident.

He added that while the shortage of staff is an issue in all the major hospitals, since KEM hospital treats only the critical patients, the need for class IV workers is more. "The residents are doing as much as they can in taking care of the patients but the situation is getting out of hand. The vacancies for class IV workers have not been filled and this ultimately affects patient care," he said. In the video, a resident doctor appeals to the public to come and help out in the hospital since 'the staff has run away'.

Dr. Hemant Deshmukh, dean of the hospital denied the allegations and said, "This video was taken during shift change and it takes some time for ward boys and nurses to put on their PPE suits. Our employees are working round the clock. Such videos should not be circulated since it brings down the morale of our employees."

Next Story : Bridge divides, don't create new ones in these times