Neurologists from the state-run J J hospital checked him on Friday and he was diagnosed as having delirium, a hospital official said 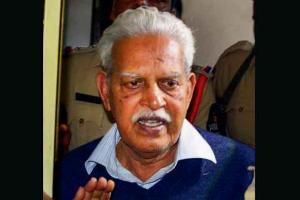 
Poet and Elgar Parishad case accused Varavara Rao, a COVID-19 patient, was on Sunday shifted to the Nanavati Hospital in Mumbai for neurological and urological treatment, an official said. Rao, 80, was undergoing treatment at the state-run St George Hospital in south Mumbai since Thursday after being tested coronavirus positive. During treatment for COVID-19, doctors found his condition to be stable but also observed he has neurological problems, the official said. Neurologists from the state-run J J hospital checked him on Friday and he was diagnosed as having delirium, a hospital official said.

Delirium is an acutely disturbed state of mind characterized by restlessness, illusions, and incoherence, occurring in intoxication, fever, and other disorders. As he required neurological and urological treatment, he was shifted to the private Nanavati Hospital in the wee hours on Sunday, the official said.

While at St George hospital, Rao responded well to COVID-19 treatment and his chest X-Ray and ECG were normal, he said adding he also underwent a CT Scan. Rao, an accused in the Elgar Parishad- Maoist links case, was admitted to the J J Hospital on Monday and was later shifted to St George Hospital, after being tested coronavirus positive.

Lodged in the Taloja jail in neighbouring Navi Mumbai under judicial custody, Rao was admitted to J J Hospital after his family members and several writers and activists asked Maharashtra government to immediately shift him to hospital for treatment, citing his deteriorating health condition. Rao's Telangana-based family members had asked jail authorities to provide him immediate medical care, claiming that when he contacted them last week, he was in a "delirious state and hallucinating".

He is behind the bars for about 22 months and had approached the special NIA court, seeking bail on medical grounds and the prevailing COVID-19 situation. On Monday, he filed two petitions in the Bombay High Court, seeking temporary bail owing to his ill-health and a direction to the jail authorities to produce his medical records and admit him to a state-run or private hospital.

Rao and nine other activists were arrested in the Elgar Parishad-Maoist links case, which was initially probed by the Pune Police and later transferred to the National Investigation Agency (NIA)