Tardeo gets a friendly, 'gay'bourhood eatery 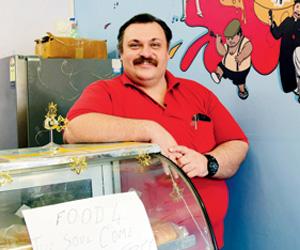 Four years ago, food entrepreneur Karl Kothavala put a spin into street food with Universal Kabab Kona (UKK). The UKK venture was a food cart stationed next to the well-known Aarey milk booth behind Bhatia Hospital in Tardeo. 'Pockets' (sandwiches) with Karl's unique cheese spread were the signature dish and drew a rush outside the cart, which had a funky vibe, "with loud music, a light box and laser lights."

Pocket power
Universal Kabab Kona closed down after a few months, for a variety of reasons, including, Kothavala says, "I could not get a BMC license." Now Kothavala is all set to open pick-a-pocket, a takeaway at Mumbai's iconic Tardeo residential landmark, Talmaki Wadi Co-operative Housing Society, home to Chitrapur Saraswat Brahmins (CSB). Kothavala says, "I hope to open by February 1."

Timing cool
For Kothavala, the timing is apt. "I am Karl Kothavala and I am gay," he pronounces with a flourish, adding, "It is a happy coincidence that pick-a-pocket will be launched during the gay pride month in Mumbai. I am thinking of having a placard at the Gay Pride March which takes place on February 3, which says: 'pick-a-pocket, your gay friendly place is just 500m away'."

Inclusive entrepreneur
Kothavala says pick-a-pocket will be a safe space for the Lesbian Gay Bisexual Transgender (LGBT) community. "The community will know when they see the giant rainbow art work on the wall," he adds. The rainbow, which stands for diversity, is a symbol of the gay community. "As an openly gay man, I want inclusiveness as part of my business," says the cheese expert.

Safe space
The LGBT friendly label is already buzzing on the community grapevine. Two days ago, Kothavala had the gay prince of Rajpipla, Manvendra Singh Gohil, and friends from New York sample the fare. Manvendra said, "There is an intangible but discernible air of acceptance at pick-a-pocket. In some places, when an LGBT person, couple or group goes out to eat, they may get glances from patrons who think they look 'different'. At other times, there is also some teasing or ridiculing. It may be covert but you can sense it and it is disconcerting to say the least. So, a gay-celebrating place is a great addition to our spaces calendar."

Mumbai spin
Kothavala who was part of the air cargo industry, says this pick-a-pocket has a tagline, 'Sandwich Version II'. He laughs, adding, "We have names like 'Pappu Pocket', 'Circuit Pocket', 'Calendar Pocket…' on the menu. We also have a play on the menu, which is called 'Menu Darrrling' instead of Mona Darling, a spin off from 'Ajit' movies where the sophisticated don with an army of lackeys like Robert and Peter, had an accomplice he called Mona Darrrrrling."

Housing history
Of the location, Talmaki Wadi in Tardeo, its solid, traditional vibe does not translate to closed or narrow-minded. "We are a very liberal community," says Hem Dholakia, managing committee member of the 77-year-old Co-operative Housing Society. "To have a commercial outlet within the society premises which is inclusive, is manifest of the liberalism we, as a community espouse." Kothavala signs off with, "The proof of the pudding, or in this case the proof of the pocket, is in the eating." Like Ajit would say, that is so right, Mona Darrrrrling. As for Robert and Peter, if they were a couple, pick-a-pocket is the place they could go to without a qualm.